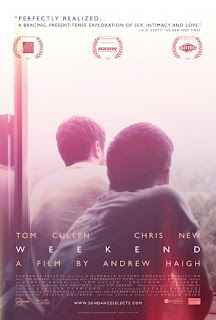 Opposites attract in English writer/director Andrew Haigh's gay romance WEEKEND. Russell (Tom Cullen) isn't completely closeted, but neither is he really comfortable with being out, even to close friends. On the other hand Glen (Chris New), the man Russell picks up at a gay night club, is so out that he's almost confrontational about it. He's also an artist, and the project he's currently working on involves interviewing the people he sleeps with about the experience and recording it. Russell isn't thrilled about participating, but he eventually agrees. As the two talk, they begin to sense a real connection between them that goes beyond sex. A serious relationship is something neither man was looking for at this point in their lives, and with Glen's plans soon to take him out of the country for at least a couple of years, there doesn't seem much chance of things lasting beyond the weekend. That doesn't mean these two can't have a real and lasting impact on each other.

Much of what Russell and Glen experience as their relationship begins and then grows over its short span is universal. No matter what your sexual orientation, anyone can relate to the heady rush of falling in love, the ways in which we try to present ourselves in the most appealing manner (even if it means putting on a front), and how we tend to idealize those we fall in love with while overlooking their faults. That said, the simple fact is that many heterosexual viewers who are not necessarily homophobic will feel uncomfortable with the film's fairly explicit sex scenes. Glen would say screw 'em, while at the same time grumbling that the only reason gay audiences would watch the movie is to see some male genitalia. Russell would probably argue that toning the sex scenes down might have allowed the movie to reach a wider audience. You'll have to decide for yourself who's right.
Haigh goes for a cinema veritté style with lots of hand-held camera work and grainy photography. There is no score, the only music on the soundtrack coming from onscreen sources like the DJ at the club. I'm fine with the use of these techniques to create a sense of realism; I just wish the efforts didn't extend to the film's sound design, as well. Yes, people mumble and whisper in real life, but if your movie is essentially two people talking to each other for an hour and a half, hearing what they say in a clear manner strikes me as more important than hearing it said “realistically”. Granted, I have a tough time with working class English accents to begin with, but this goes beyond that. Fortunately the two leads do a great job at conveying the emotional gist of their scenes even when I couldn't make out what they were saying. That doesn't excuse the issue, but it does make it easier to recommend the film in spite of it. 3 out of 4 stars.
Posted by Bob Ignizio at 12:01 AM