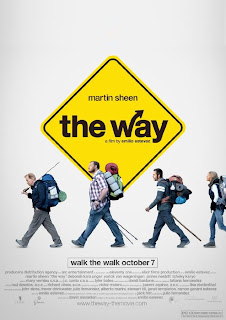 The journey down a long road can be a “metaphor bonanza,” observes one character in THE WAY, the new drama from actor-director Emilio Estevez.  Such a quest can be symbolic of life’s many decisions and milestones—or stand in for the life journey itself.
Tom Avery (Ramon Gerard Estevez, b.k.a. Martin Sheen) is a successful ophthalmologist living in an idyllic “bubble” in —until the afternoon his golf game is interrupted by the phone call no parent ever wants to get.  His son Daniel (played in flashbacks by Emilio himself) has been killed in a storm while hiking in the .  Dr. Tom must fly to and claim Daniel’s body.

Turns out Daniel died on day one of a trek called the Camino de Santiago—or “Way of Saint James”—an 800 kilometer path snaking from St. Jean Pied de Port () to Santiago de Compostela (, ).  People from all walks of life have taken the journey over the last thousand years, explains an amiable gendarme.  Whether or not they believe the Cathedral de Santiago truly holds the remains of St. James is beside the point; the journey is always personal and—religion aside—very spiritual.
Tom initially doesn’t understand.  Despite his skills with patients, the American eye doctor never really saw eye-to-eye with his only child, who at age forty quit pursuing a doctorate to explore the world.  And find himself.
“You don’t choose a life, Dad,” says Daniel.  “You live it.”
Tom decides to finish walking “The Way” in Daniel’s stead, bringing his son’s cremated remains along so they might—for once—travel together.  He winds up taking in a lot of gorgeous Spanish countryside—and discovers more depth in his own self than he ever thought he had.  The going isn’t easy for the "Boomer," especially at first; Tom knocks over a lamp while putting on his backpack and sets out from his hotel in the wrong direction.
Tom allies with fellow “Pilgrims,” including Joost (Yorick van Wageningen), a jocular Dutchman with a taste for food, wine, and cannabis.  Later, they meet Sarah (Deborah Kara Unger), a beautiful but vexed Canadian who wants to quit smoking.  Also tagging along is Jack (James Nesbitt), an Irish magazine columnist with writer’s block.  The four allegorical castaways alternately amuse and test each another, and have their scallop-shell passports stamped at each stop to document their progress.  Tom sprinkles Daniel’s ashes in picturesque places, occasionally “seeing” his grown son there with him.  His pack is lost to a raging river and stolen by a teenage gypsy, but he stays the course, learning more about Daniel’s passion—and friendship in general—with every step.
Comparison with other literary “road trips” becomes unavoidable (THE WIZARD OF OZ, ZEN THE OF MOTORCYCLE MAINTENANCE, etc.), but THE WAY is both clever and touching. The cinematography alone is worth the admission.  The Spanish landscapes, villages, and interiors (all shot on location) are lovely, and the extras are colorful and zealous in their love of history and culture.  Emilio—who actually did walk The El Camino with his son and father—clearly took the experience to heart, and the elder Estevez (Sheen) turns in an Oscar-worthy performance. 3 1/2 out of 4 stars
Posted by Peter M. Roche at 12:01 AM