The Virgin Spring (October 29th and 30th at the Cleveland Cinematheque)

[THE VIRGIN SPRING screens Saturday October 29th at 5:10pm and Sunday October 30th at 4:30 pm at the Cleveland Cinematheque.] 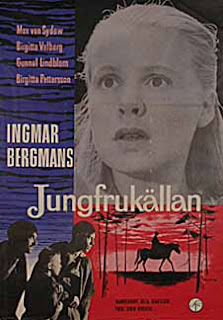 Am I the only one who missed this news item? It seems digital-mad filmmaker Robert Zemeckis, having done motion-capture CGI adaptations THE POLAR EXPRESS, A CHRISTMAS CAROL and BEOWULF, was next scheming an all-computer remake of...YELLOW SUBMARINE, the iconic trippy Beatles cartoon. But when Zemeckis' digital-capture kiddie offering, MARS NEEDS MOMS, bombed at the box-office earlier this year, plans for a Yellow Submarine 2.0 went under (hardy har). I know irresistible marketing ideas like this are hard to kill - anyone remember the Bee Gees/Peter Frampton movie version of SGT. PEPPER'S LONELY HEARTS CLUB BAND? - and I will believe in the permanent deep-sixing of this property when I (don't) see it. But meanwhile,...whew! Felt like one of those asteroids that's supposed to slam into Earth just missed us.


On the subject of remakes, wanted and unwanted, the Cinematheque is reviving, as a Halloween offering, Ingmar Bergman's 1960 Oscar-winner Jungfrukallan, better known outside of Sweden as THE VIRGIN SPRING. What gets the arty flick a listing in most horror-flick guidebooks? It is considered the source material for American shock-master (and former Ohioan) Wes Craven's notorious 1972 debut feature LAST HOUSE ON THE LEFT, also being screened at the Cinematheque for local gorehounds to do a direct movie comparison-autopsy. But let me describe THE VIRGIN SPRING in detail myself...

No wonder people call Ingmar Bergman a genius, man! There's this tunnel of chainsaws that dismember a bunch of cannibal rednecks! There's this chick with huge boobs who turns into a werewolf - so now she's got, like SIX hairy huge boobs - while she's fed into a woodchipper. There's this guy who's killed by zombies, so he comes back as a vengeful zombie, and he kills the zombies - but then they come back as living-dead zombies, I guess zombified zombies, and they kill him again! And so he has to come back as a zombie zombie-zombie slayer and re-kill the back-from-the-dead zombies....

Okay, have the horror fanciers all stampeded to the Cinematheque with wads of cash in their hands yet? University Circle owes me big time. Now we can speak freely.

Bergman's drama, like his earlier SEVENTH SEAL, is steeped in medieval lore (and inspired, so I'm told, by an ancient Scandinavian ballad, making LAST HOUSE ON THE LEFT a thrice-removed remake), though it takes a more straightforward, less revisionist approach. Still, Bergman's preoccupations with faith and the loss of faith under duress is still strongly evident in the stately, dignified narrative. In the 14th-century Swedish countryside Tore (Von Sydow), a pious and prosperous landowner, loves both God and his cherished daughter Karin, giving her an immaculate gown to wear to church as she goes on her own for a Marian ceremony (meanwhile another adopted daughter still clings to old pagan ways and Odin-worship). En route the ethereal and slightly coquettish Karin arouses lust in three uncouth goatherds, two older men and a youth. They begin by flirting with Karin, but ultimately rape and murder her. Then the traveling killers happen to drop in, unwittingly, on Tore and his wife to spend a night under their roof. Tore is all friendship and Christian generosity - until he finds the precious gown the men have planned to sell and, in agony, realizes what has happened.

There being no police, due to Ohio's passage of Senate Bill 5 (just kidding. But really, Issue 2 people, use all that wonderful union-fund money of yours to buy big political ads on the Cleveland Movie Blog arguing your point. How to do you know our readership isn't going to be the swing vote?), it's up to the grieving father to take justice into his own hands and execute the transgressors one by one, withholding mercy from even the repentant youngest. That's What Would Odin Do, of course, but what will the Christian God think about the bloodstains on the father's hands, figuratively and literally?
Bergman is a little less ambiguous on that than in his other questioning dramas, finishing THE VIRGIN SPRING with an affirming miracle - perhaps intended ironically, like Von Trier's BREAKING THE WAVES, maybe not. Maybe BREAKING THE WAVES wasn't ironic either; it scared the bejesus out of one Christian I know. Maybe the best way to view THE VIRGIN SPRING is rather like John Boorman's EXCALIBUR, as what might be produced if a Dark Ages bard traveled through time and attended film school to learn to tell his handed-down stories - assuming Robert Zemickis wasn't the teacher, of course. But Sven Nykvist was the cinematographer used by Bergman, and his glorious monochrome imagery is such that one cannot even imagine this film in color.

If anyone knows what Ingmar Bergman ever thought of LAST HOUSE ON THE LEFT I'd like to hear it. Oh, the horror fans are back. They're very angry at me, said there was no gore, no werewolves and zombies, just black-and-white people talking a language not unlike what the Swedish Chef used on the Muppets, and that Von Sydow guy who was in the first CONAN THE BARBARIAN with Schwarzenegger, maybe a few other films too. Where's that blood feast I promised? You see, you were all mistaken and went to the wrong Cinematheque, I meant the one at Temple University in Philadelphia. No, too late, it's closed now. It really needed your business. Now go hang your heads in shame (I'm such a Blue Meanie at times). (3 out of 4 stars)
Posted by Charles Cassady Jr. at 12:00 AM