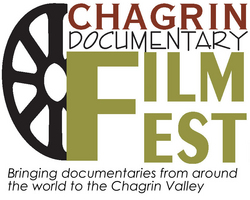 The Thomas Kinkade-painting town of Chagrin Falls may be on the show-business map for being an occasional movie-shooting location (THE GATHERING, HOUSE ARREST) and producing Tim Conway and National Lampoon writer Doug Kenney. In the last few years, it's also become eponymous home to the Chagrin Falls Documentary Film Fest, taking place from Tuesday, October 11 through Sunday, October 16.
The festival has two notable distinctions, the first being that it is the only all-documentary film festival in the region. Secondly, it happens a la Sundance, all over town at different flavored small venues, not at the resident Cleveland Cinemas multiplex. Screening localities include several town churches, the school auditorium on Philomethian Street, the Township Hall, even inside Umami Asian Restaurant.

The festival started in 2010, a literal labor of love for the Ponce Family. Chagrin Falls native David Ponce was a budding documentary filmmaker who died at 20 of leukemia in 2006 during production of his film THE LOST SPARROWS OF ROODEPORT, about a church-run orphanage and AIDS hospice in South Africa. The stated goal of the Chagrin Falls Documentary Film Festival, according to David's mother, festival director Mary Ann Quinn Ponce, is to continue telling stories from around the world through the medium that David loved best, nonfiction film.A screening of THE LOST SPARROWS OF ROODEPORT takes place this year on Saturday, October 15, at 1 pm at the Federated Church, with a special panel discussion.
Other noteworthy entries among the six days of all-day movies include BOB MARLEY - THE MAKING OF A LEGEND, about the mythic icon of Jamaican reggae, and a special Halloween treat, BEST WORST MOVIE, a memoir/what-where-they-thinking? movie autopsy by a former child actor who appeared in TROLL 2, a lunatic Italian horror schlocker about vegetarian cannibal goblins (yes, it's possible). TROLL 2 is now being rediscovered and revered by bad-film addicts.
In connection with BEST WORST MOVIE's "midnight" (by homey Chagrin Falls standards) time slot at 10:15 p.m. on Saturday night on Philomethian Street, there will be an audience-participation "zombie walk" an hour earlier, in the heart of the village at Chagrin Falls Triangle Park.
Other special events and guests include stand-up comedy at the Eagles Lodge, Cleveland Film Commissioner Ivan Schwartz opening the Festival at the Chagrin Valley Little Theatre, sushi served with the screenings at Umami (wonder if anyone will note that the actual equivalent of popcorn in Far East movie screenings is often dried squid, true fact!), a Friday night "meet the filmmaker" gala, and a Saturday night red-carpet banquet with Jan Jones.
Closing-day Sunday will see the festival prizes awarded (trophies modeled after the famous Chagrin Falls Popcorn Shop; naked bald golden men just aren't very Chagrin Falls). The competition/awards ceremony concludes at the Chagrin Falls Performing Arts Center, along with a few additional screenings.
Tickets to features and feature-length short-subject bundles are $10 and can be purchased in advance at three locations: Chagrin Falls Township Hall (during 11 am to 3 pm.) at 83 North Main St., the 1st Federal of Lakewood bank branch at 2 E. Washington St., and the PNC Bank at 34 N. Main St, all in Chagrin Falls, and via the festival website. Other payment plans are available, right up to the all-access festival pass of $65. For full information and schedules, go online to www.chagrindocumentaryfilmfestival.org.
Posted by Charles Cassady Jr. at 12:01 AM