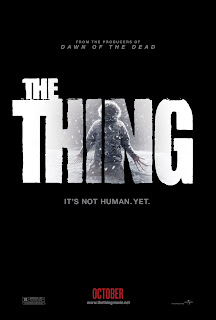 A group of Norwegian researchers in Antarctica discover an alien spacecraft buried beneath the ice. Nearby they also find the frozen remains of one of the ship's occupants which they dig out and take back to their base. American paleontologist Kate Lloyd (Mary Elizabeth Winstead) is called in by Dr. Sander Halvorson (Ulrich Thomsen) to examine the specimen, but she doesn't get very far in her task before the creature bursts out of its icy prison, still very much alive. The alien is able to replicate the form of anyone or anything it kills, so there's no way of telling who is friend or foe, or what deadly and bizarre shape the Thing will take when it reveals itself.


John Carpenter's 1982 version of THE THING is one of a small handful of films that prove not all horror remakes have to suck. It's about as perfect a horror/sci-fi film as one could hope for, chock full of great characters, memorable dialogue, indelible shocks, and some of the most amazing special effects ever committed to celluloid. Carpenter's film bears only a passing resemblance to Howard Hawks 1951 version. Instead he goes back to the short story “Who Goes There” by John W. Campbell that was the basis for the original and extrapolates from there to create something uniquely his own. I watched it again just prior to seeing this latest THING, and it still holds up.
Not that I want to encourage Hollywood to crank out any more remakes than they already are, but if someone felt a genuine passion to take yet another pass at this material in a way as fresh and original as Carpenter's vision, I'd be okay with that. But a prequel? What's the point? If you've seen Carpenter's film, there's no suspense because you already know everything of any importance that's going to happen.
At least Eric Heisserer's screenplay avoids the urge to flesh out the “mythology” of THE THING with pointless minutiae, but all that leaves for his script is to dutifully hit all the marks necessary to line up with the Carpenter film. In doing so it winds up feeling pretty much like a remake, anyway. Or perhaps more accurately, it feels like an installment of a franchise like FRIDAY THE 13TH where a new batch of victims are inserted into the same general outline with only a few minor tweaks.
The direction by Matthijs van Heijningen Jr. is capable but bland. It's clear he has a healthy respect for Carpenter's THE THING, but he either doesn't understand what made that film work, or isn't capable of replicating it. That's perhaps best exemplified by comparing the scenes in the two films in which the characters devise a test to determine who is and isn't still human. Carpenter hits it out of the park; van Heijningen fouls out, and doesn't even swing that hard.
Where Carpenter's THE THING created a palpable sense of isolation and paranoia, punctuated by truly effective scares and special effects set pieces, van Heijningen merely gives us a by the numbers creature on the loose flick. None of the characters resonate, the plot is rote, and we see way too much of the monster. Speaking of the monster, the modern CGI Thing doesn't look bad, but it does go to show that the best practical effects of the eighties are still more creative and convincing than anything a computer can cook up today. The 2011 THE THING is still marginally entertaining, but it's hardly the sort of film anyone will be talking about (or considering making prequels or sequels to) decades later. 2 1/2 out of 4 stars.
Posted by Bob Ignizio at 12:01 AM