Stalker (October 23 at the Cleveland Cinematheque) 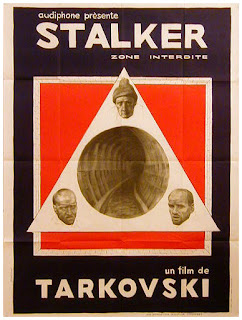 Okay, this is emperor-has-no-clothes time. Where I must throw mud on some world-cinema masterpiece everyone else reveres. No wonder my rare job interviews never lead anywhere. All some venal boss or human-resource harridan has to do is Google my writing, see the evidence, and broadband their shocked verdict to the world: "CHARLES CASSADY THAT UGLY M*@%!KER DIDN'T LIKE TARKOVSKY'S STALKER THE F&^!@ING SON OF A WHORE! NOBODY F%@!*ING HIRE THE BASTARD FOR ANYTHING! THAT'S A F#%*!ING DIRECT ORDER." And that's just when I apply at the Catholic Diocese.


Well I'm sorry. Have any of you people, outside of old-line Left wing/Kremlin-friendly liberal-arts college professors, even ever seen STALKER? Sober, I mean? Though it wears the badge `Masterwork of World Cinema' as proudly as an aged Moscow commissar bent under the burden of his Battle of Stalingrad medals, Russian filmmaker Andrei Tarkovsky's 1979 foray into future-shock, in my humble opinion, is strictly for those viewers who found his SOLARIS too action-packed and frenzied. Talkier than one of Kruschev's old Party speeches - but much better photographed, I'll agree to that one, comrades. It concerns two men, one a writer, the other a scientist, on a quest sometime in the future after some mysterious cosmic disaster touched a region of the Earth and turned it into "the Zone”. The Zone is an uninhabited urban wasteland, full of ruins and superstition-type rumors, and bordered by peasant-throwback villages where, it is said, the forces within the Zone have contaminated and warped the lingering residents.

It's from one of these communities that the scientist and the writer hire a grizzled, foreboding "stalker," or guide, to lead them through the Zone to where there supposedly abides a Room in which the frazzled strands of the disrupted universe come together in such a way that any human question is answered or wish granted. But does mortal man have the right to do this? For more than two and a half largely uneventful hours the trio creep stealthily (but talkatively) through the dilapidated shadows of the Zone, debating the rational-vs.-artistic POVs of their quest. With the stalker warning perpetually about the terrible dangers that surround them, the men get spooked by strange noises and stray dogs, generally going around in circles and terrorizing/orating themselves to the point of physical paralysis. It's sort of like those kids in THE BLAIR WITCH PROJECT but arguing rival philosophical dissertations about the nature of existence. And if you think things get better when they finally reach The Room, you'll be sorely disappointed. There isn't even Tommy Wiseau in it (I wonder if anyone will get that joke about Tommy Wiseau if this post stays up years and years from now?)

Visually this is indeed a provocative picture, with cinematographer Alexander Knyazhinsky predicting what post-apocalyptic industrial-music videos and ALIEN sequels were going to look like, with his rolling scenescapes of patterned rubble, mounds, archways, puddles and detritus. STALKER has been credited by its many fans of predicting the irradiated netherworld that the area around Chernobyl has become – though parts of Cleveland also look like the Zone (only with a worse economy). Still, it's a long walk to nowhere, even for a filmmaker such a Tarkovsky, for whom artfully extended, slow, formally composed takes were a la mode.

In a futile effort to appreciate STALKER I scrounged the source material, the novella “Roadside Picnic” by brother Soviet science-fiction authors Arkady and Boris Strugatski. It's a more effective think-piece, the proposition being that the Zone is where space beings of incomprehensibly awesome technology made a brief stop, did trivial stuff and moved on, leaving behind litter, energy residue and landing-traces that to us ant-like, baffled humans are a monstrous, toxic disaster area. Some other Strugatski properties were made into movies by the USSR's state film industry, especially after commercial science fiction got so LucasFilm-huge in the west. One of them was HARD TO BE A GOD, based on a book that was an interesting dramatization of the Starfleet "Prime Directive" notion wherein advanced cosmonauts try to blend in on a primitive planet without disrupting the feudal native culture. I've heard different things, that HARD TO BE A GOD is terrific or that it's a crashing bore. Just as you have now heard both sides about STALKER. So what will you believe? Is there ultimate truth? Save yourself gas money and just talk that one over in Russian while crawling around the yard for three hours. (2 out of 4 stars)