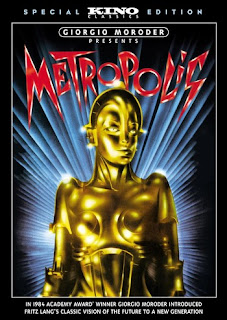 In 1981, three-time Academy Award-winning composer Giorgio Moroder began a three-year endeavor to restore director Fritz Lang’s science fiction classic, Metropolis. During this process, Moroder made the controversial decision to give the film a new, contemporary score, and added a pop music soundtrack featuring songs from some of the biggest stars of the early MTV era, including Pat Benatar, Billy Squier, Freddie Mercury, Bonnie Tyler, Adam Ant, Jon Anderson and more.
In addition to the new score, missing footage was re-edited into the film, intertitles were removed and replaced with subtitles and sound effects and color tinting were added, creating an all new experience...and an all-new film! But for more than a quarter century, this version of Metropolis has remained out of print - until now. A new HD transfer was created from one of the few remaining prints available, and film distributor Kino Lorber is presenting the film in the best possible quality - just as it was seen in its original release in August 1984.
Tickets are $5 and are on sale now at the Cedar Lee Theatre box office and online at www.clevelandcinemas.com.
Posted by Bob Ignizio at 12:01 AM