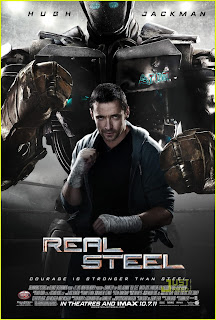 Chalk it up to low expectations, but the first thing I dug about Shawn Levy’s (NIGHT AT THE MUSEUM, DATE NIGHT) tale of redemption and droid-on-droid fisticuffs, REAL STEEL, is something it didn’t do: scroll out a GB’s worth of expositional text in some brutally exaggerated "future" font (you know what I mean: Earth. The year is 2027. Humans have blah blah new sport, robot fighting something blah.) From there on, the film continuously defied even my most cynical expectations. There’s no over-teched, neon-drenched cliché of an urban setting, no leather-laced light-up haberdashery, and no over-beaten horse corpse of an Orwellian government or sinister corporation… There’s just a scrappy ex-boxer, a precocious kid and a trash-picked robot determinedly (robot) fighting their way to the top of the (robo)heap. The result is a tight and undeniably joyful film that’s biggest flaw is an excess of heart – an almost welcome peccadillo given this age of oppressively smug and jaded Hollywood cinema.

REAL STEEL is a film without twists or convolutions. It’s like a dollar store Mad Libs titled “Typical Sports Movie” where the only fillable blank asks for [competitive sport] and someone calls out Robot Boxing. It’s, therefore, no more about the nitty-gritty of robo-pugilism than RUDY is about football or THE FIGHTER is about human pugilism. Hugh Jackman’s (freakin’ Wolverine) disgraced boxer-turned-disgraced robot boxer controller, Charlie Kemper, swaggers and mouths off and loses money, until he meets his plucky, estranged 11-year-old son Max (played by Dakota Goya, who played boxer Bob Satterfield’s son in RESURRECTING THE CHAMP), whose youthful passion for robot boxing (and inexplicable technological acumen) leads the two to team up and refurbish an old-but-sturdy trash-picked sparring bot. Also, there’s a requisite love story thing with Charlie’s dead trainer’s daughter, who Evangeline Lily (Kate on TV's Lost) imbues with many an adorable winking half-smile.

Given the paint-by-numbers plot template, I wouldn’t blame anyone for asking “So is the silly robot boxing just a gimmick to resuscitate a D.O.A. sports movie script?” Here’s the thing, though: the human elements, which are a bit heavy on the moony looks, pining eyes, tearful epiphanies and emotional crescendos, would, if left unchecked by mechanical uppercuts, drown the film in treacle… while the robot fighting, without the underlying human story to break up the blitzkrieg of automated haymakers, would sorta just be TRANSFORMERS without all the car chases – in other words, interminable rock ‘em, sock ‘em tedium. The real benefit of dropping a (robo)boat-load of boxing machines and their human pilots into a feel-good sports movie is that, in a feel-good sports movie, the hero’s worst enemy is himself. That means any other potential nemeses can now become cartoonish supporting characters without damaging the film's core emotional conflicts.

Meaning, in this case, the robot boxing world can be really fun without having to add legitimate pathos to its derelict zoos full of rioting MAD MAX extras.

The film’s non-protagonist’s-own-tortured-soul baddies include a rhinestone cowboy, a cyberpunk Japanese programmer and an icy Russian temptress, all of whom, like the equally gratuitous gangs of THE WARRIORS, have just barely enough screen time to cash in on their sheer comic book appeal before we’re back to the doe-eyed kid making sad faces at his salvaged Punch-O-Matic. Screenwriter John Gatins (COACH CARTER) also makes superlative use of various robot boxing announcers, whose on-the-nose WWE-style exhortations are so sublimely amped-up, it can take a few rounds before you realize the script is laughing with you.

By the way - there is an underground fighting ring at an abandoned zoo full of sneering punkers. And a ring at a country western bar. And one at an army base. The backdrops for all the matches could have been torn directly from screenshots of Street Fighter 2 and its arcade ilk, which is fitting given the film’s direct engagement with America’s love of video games – boxer’s humans use both hand-held and arcade-style units to remotely pilot their fighters and, outside the robots themselves (and some initial shots of an America dappled with wind harvesters), the only technological advances portrayed in the movie seem to relate to portable electronic devices. (I can’t overstate how nice it is to see a modern science fiction film that doesn’t kill itself trying to portray a Times Square-worth of chic, product-placed contraptions.)

For all it adds to the servo-strewn chaos of the ring, the Kemper father-son-robot relationship can get frustrating. It’s over the top and does, at times, have the plasticine aftertaste of artificial sweetener. But the cinematic medicine that is robot ass-kicking helps the sugar go down. What’s really frustrating are the occasional moments when the film forgets that we already know where it's going and that, though we do require some longing looks and a pinch of raw self-pity now and again, ten minutes of Will They Or Won’t They [emotion-driven character decision] isn’t necessary. We know they will. Meanwhile, Sci-fi acolytes hoping to plumb the depths of robot boxing tech and regulations – from how many different control methods a competitor can employ in single match to strength limits to the vast military potential of the competitors – will be sorely disappointed.

But if you can look past the surplus melodrama, shelve your pop culture guilt reflex and recall a time when you never wondered what would happen if Bruce Wayne got audited, or how every planet in STAR WARS has breathable air and seemingly identical gravity (even the Ewok world… and that’s a moon), you’ll leave the theater smiling, and clapping and rejoicing in eye-rollingly ill-advised puns. I'll get you started: Muhammad Wall*E. (3 out of 4 stars)
Posted by Matt Finley at 12:01 AM