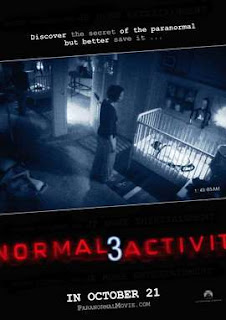 Three films in, entries to the PARANORMAL ACTIVITY series are easy to reduce to a simple recipe: one relatable domestic setting; one perpetually invisible assailant; and one American family unit w/ camera-happy everyman. Wrap ingredients in a single, flaky sheet of hoodoo mythology, drizzle with jump scares and simmer over mounting ookity-spookity shenanigans. Add artificial butter to taste. And that's accurate, in a dismissively glib sort of way. But the recipe argument, which has been applied to uncountable genre franchises, never values each independent ingredient for what it really is: a creative limitation – a challenge - that dares the filmmaker to craft something original from familiar tropes. Succeed (*ahem*WES CRAVEN’S NEW NIGHTMARE) or fail (*coughcough*HELLRAISER III: HELL ON EARTH), it’s fun to watch a filmmaker try. So, yeah - writer Christopher Landon’s (DISTURBIA) and co-directors Ariel Schulman’s and Henry Joost’a (CATFISH) PARANORMAL ACTIVITY 3 is a good time, and a worthy entry for anyone cravin’ its flavor.

For those of you keeping score, each PARANORMAL ACTIVITY is a prequel to the one before it, and fills in a few more narrative potholes. So, we found out in the last movie that the demon that terrorized Micah and Katie in the first movie was sicced on them by Katie’s sister, Kristi, to keep said demon away from Kristi’s baby, who, it’s theorized, was marked for Grand Theft First Male Child by the girls’ witchy grandmother. Now it’s 1988. Katie and Kristi are kids (Chloe Cserngy and Tyler Brown, respectively). Their mom, Julie (Lauren Bittner), has recently shacked up with doofy, well-meaning wedding videographer Danny Rey (Brian Boland). Things are about to get paranormaler (by our standards… chronologically they’re just getting paranormal for the first time).

Creative limitation-wise, the biggest hurdle facing a PARANORMAL ACTIVITY craftsman is this: Each movie’s ookity-spookity shenanigans have to trump those of the prior entry, while still remaining innocuous enough that thin-skinned suburbanite characters don’t mind stumbling around and filming all the horror for posterity's sake. So far, all of the films (including this’n) have exploited fledgling-though-committed romances - boyfriend and girlfriend; widower and step-mom; and, here, single mom and boyfriend - as a means to keep the primary couples huff-pouty enough to ignore the larger supernatural threat.

Landon, Schulman and Joost launch an additional three-pronged attack -Prong 1: A minor change-up – the comically rational disbeliever is the mom; Prong 2: The titular paranormal activity is spread out over half a dozen characters, including a random babysitter and Danny’s crayon-dumb bro of a brother, Dennis (Christopher Nicholas Smith) ; and Prong 3: Through a pervasive sense of levity.

Part of it’s the kids – with the demon’s primary demographic reduced by a couple decades (yes, it’s the well-worn supernatural imaginary friend storyline), there’s more hair pulling and sheet-wearing than ever before. But the film also has its fair share of humor. And not, like in the previous films, all bunched and crumped up into the domestic fugues between terrors. Smith’s sidling, wake-and-bake portrayal of Daniel makes one of the film’s nards-out scariest sequences – a predictably ill-advised game of Bloody Mary – simultaneously one of its funniest, and there’s at least one Joss Whedon-worthy self-conscious smash cut of the “We’re not doing that” / [demon attack] / [characters doing that] variety. Even one of the series’ least savory ingredients – the yawn-inducing sex tape suggestion – is finally paid off in a scene that’s at once awkward, sweet and predictable.

The paranormal activity itself is, for the most part, old hat – brute-force house throttlings and people-puppeteering all preceded by the dread vibrations of a phantom sub-woofer. Thankfully, the kitschy reversion to VHS (and, in fact, all the time-limited cultural references) manages to safely navigate the minefield of cliché ‘80s references, while the camera set-ups themselves – bedroom-encompassing tripod mounts with the occasional handheld jaunt – feel comfortably standard. The one notable exception is a camera that Daniel sets on the moving base of an oscillating fan, the effect of which is gimmicky, but, ultimately, pretty awesome.

Though the film does contain the highest number of cheapo, not-even-demon-related jump scares of any of the movies, it also does something we haven’t seen before – changes setting. And that’s all I’ll say about that.
As to the story: If you paid attention to the gabbity bits of the last couple movies, you know how this film is supposed to end. And if you didn’t pay attention – don’t worry, it doesn’t end that way. Actually, it sort of doesn’t end at all. The broad picture fits with everything we found out in the last film but, well, let me just say this – the crowd’s reaction when the movie ended? Twice as nasty as the crowd’s reaction to that part in A.I. when the movie doesn’t end. That having been said, I can’t imagine that too many people were living and dying by PARANORMAL ACTIVITY's overarching narrative trajectory. Regardless, if the SAW films have taught me anything about self-important modern horror franchises, it’s that there’s a good chance that, three films from now, we’ll flash back to the second film and everything will be convolutedly explained.

Proponents of the recipe outlook – I know. I’ve done nothing to tempt your discerning palettes. Fans of the horror movie franchise, in all its gloriously familiar, Shatner-masked, razor-gloved, flying-sphered, some sort of WISHMASTER reference glory – come and eat or something. Okay, this metaphor’s getting ridiculous. If you like the other PARANORMAL ACTIVITY movies, probably you’ll like this one. (3 out of 4 Stars)
Posted by Matt Finley at 12:01 AM