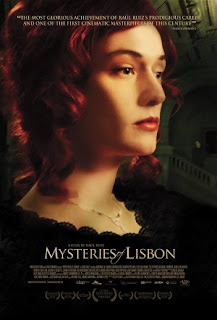 You really don't see too many sweeping epics the likes of MYSTERIES OF LISBON (Mistérios de Lisboa) these days. Even back when Hollywood made films like DR. ZHIVAGO and LAWRENCE OF ARABIA, they never clocked in at 4 1/2 hours like this one does. So perhaps MYSTERIES has as much in common with made for TV “event” programming from the seventies and eighties like SHOGUN, THE WINDS OF WAR, and CENTENNIAL. In fact, this was a TV miniseries originally, with this being the shorter (and director's preferred) version. Regardless, it's still a whole lot of movie, and even split into two parts that's likely to be the biggest obstacle in getting people to watch this engrossing period drama.


As its title suggests, this is a film full of secrets to be discovered and mysteries to be solved. Chief among those in the first installment is the parentage of the film's narrator and main character, 14 year old Pedro da Silva (João Luís Arrais). Like many a Dickens protagonist, Pedro is trying to make his way through life as an orphan in a society that offers little in the way of upward mobility for his kind. As it turns out, the boy may well have noble blood flowing through his veins, but unfortunately for him, it's not the blood of the right nobles.
Just as intriguing a mystery, if not moreso, is the checkered past of Father Dinis (Adriano Luz), a priest who makes it his personal mission to look out for Pedro and his mother Angela (Maria João Bastos). We're not entirely sure if Dinis really is a man of the cloth, or if this is just the latest of many identities he has worn. He seems altruistic, but the man's true motivations are hidden. And then there is the unorthodox nobleman Alberto de Magalhães (Ricardo Pereira) who has a past life of his own that just so happens to be intertwined with Pedro and Dinis.
There isn't a whole lot in this first half of MYSTERIES OF LISBON that would qualify as action – one character gets shot, and another is challenged to a duel which he refuses to participate in. There's more than enough intrigue to hold the viewers interest, though. Director Raoul Ruiz also punches things up visually with a some creative visual touches, like having some scenes enacted using cutouts on a cardboard stage Pedro plays with. All in all Ruiz has made a very fine looking and sumptuous film that belies its meager (by Hollywood standards, anyway) budget, and even without its concluding portion this 2 hour film would make a worthy swan song for a director who has made over 100 films in a career that spanned 48 years. In case I don't get to finish Part 2 in time to review it (it screens at the Cleveland Museum of Art on Friday October 21 st at 6:30 pm), let me just say that the end of Part 1 definitely has me wanting to find out what happens next. 3 out of 4 stars.
Posted by Bob Ignizio at 12:01 AM