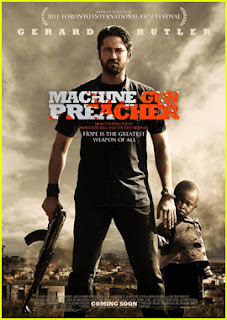 For much of his early life, Sam Childers was what you might call a bad man. He was a biker and a drug user, and not at all adverse to violence. Then he found Jesus, and soon after found himself in the Sudan where he became aware of the plight of the Sudanese children left orphaned by that country's civil war. His response to what he saw there combined both his new-found faith and his old violent ways. Childers set about building an orphanage to take care of the kids, and protected his charges with force when necessary, sometimes of the lethal variety. It's a story tailor made for Hollywood that has something for just about everyone: sin and redemption, compassion and violence, action and family drama.

MACHINE GUN PREACHER, Marc Forster's film adaptation of Childer's life, takes all those ingredients and forces them into a predictable biopic structure with the emotional ups and downs falling exactly where you expect them. Luckily Childers story is interesting enough to retain most of its power despite the cookie cutter approach, but one can't help but shake the feeling that it would have been better served by a documentary. Of course far more people are likely to see this dramatization than any documentary, so I guess you just can't win.
Gerard Butler gives a solid performance as Childers, although hair and costuming could have done a better job making him look like Childers; in particular, he's missing Childers distinctive walrus mustache. The always reliable Michael Shannon is good as well as a biker friend of Childers who also tries to turn his life around, but with less success. And its nice to see Souléymane Sy Savané, star of the excellent GOODBYE SOLO, as a Sudanese soldier who shows Childers the ropes in his country. Michelle Monaghan sadly is wasted in an all too typical wife/girlfriend of the hero role, even though from what I gather the real Lynn Childers played a more significant part in events.
When all is said and done, MACHINE GUN PREACHER is reasonably entertaining, and it might help bring some attention to what's going on in a part of the world many Americans don't think much about. But I have a nagging suspicion that it oversimplifies a great deal, giving its white hero a shiny white hat when a gray one might have been more apt.
The only scene that comes close to providing a different perspective on what Sam is doing is one in which a female aid worker tells him his use of violence is the wrong approach, and that the very enemy he fights started out just like him (only to have her words rebuked by something that happens later in the film). The film does spend a little more time on the toll Sam's dangerous crusade takes on his wife and family, but that, too, winds up being dismissed far too easily, and without any need for change on Sam's part. Childers may falter on his path from time to time, but there's never any doubt that it's the right path. If this were some violent action fantasy starring Sylvester Stallone, okay. But for a movie that holds itself out as being something more substantive, it doesn't fly. 2 1/2 out of 4 stars.
Posted by Bob Ignizio at 12:01 AM