Legend of the Millennium Dragon (now on video)

[LEGEND OF THE MILLENIUM DRAGON is now available on home video.] 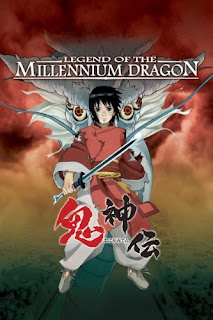 Question: Why are Japanese schoolchildren never home-schooled? Answer: Because without any peers to pick on, they will bully themselves into committing suicide. Okay, so I'm not a great fan of Japanese culture. A little too much sword and not enough chrysanthemum about those folks, if you get my obscure-reference anthropological drift. And that business about Pear Harbor still bugs me, oh it does. But I must admit, the Japanese animation industry is one of the wonders of world cinema, and LEGEND OF THE MILLENNIUM DRAGON (no relation to Cedar Point's Millennium Force or Han Solo's Millennium Falcon) is one of those wonders among the wonders.


Sony Home Entertainment - anyone remember when Sony took over Columbia Pictures and the Japanese couldn't make head nor tail out of dysfunctional, corrupt Hollywood accounting and business practices? It was nutty, I tell you - released this anime epic straight to video in this country. Having had to watch a lot of anime OVAs and stuff lately I was blessedly relieved by LEGEND OF THE MILLENNIUM DRAGON. It's a traditional heroic fantasy of the old school - not centered around sassy, sexy, silly samurai-ninja Tokyo schoolgirls of impossible physical proportions with robots or funny-little-animal companions.

No, instead there's a dignity and a gravitas reminiscent of the well-received PRINCESS MONONOKE. The setup sounds, unpromisingly, like the Jet Li-Jackie Chan epic FORBIDDEN KINGDOM, but trust me, it gets better. Fatherless Jun Tendo is a timid, ineffectual adolescent schoolboy in modern Kyoto, still shell-shocked that his dad died saving a pedestrian's life at a crossing. Jun is suddenly assailed by what we learned from a medieval prologue is an "oni," a hairy, orc-ish looking demonic creature with blazing red eyes. Jun seeks refuge in a temple, which is actually an intentional time-trap set by a mystic priest-wizard Gen'un, that teleports the boy back 1,200 years to an ancient Nippon in which a budding human civilization suffers attacks from the savage, shape-shifting oni.

The quivering Jun, Gen'un explains, has an ancestral heritage that marks him as a born warrior-messiah who can summon a powerful spirit-dragon named Orochi and destroy the oni. But Jun can't imagine himself fighting, even with a whole worshipful kingdom calling him "Savior" and an obedient flying dragon at his side (the grandly designed Orochi is a vision right out of Chinese scrollwork). It turns out that Jun's misgivings are well founded. In a decent twist, Jun learns that the dreaded oni are not as bad as they seem and that Gen'un, despite his claims of seeking an everlasting peace, is not the virtuous Gandalf-type he first appears.

In fact, it's the same conflict of technology-vs.-nature that PRINCESS MONONOKE peddled, just a little less heavy handed here (but is it hypocritical that CGI-heavy tech made this hybrid form of anime possible?). It's an eyeful of gorgeous spectacle, even if the plot ultimately turns into a kaiju-ish beat-down between ever-increasingly powerful magical entities, with the emotional sidelight that Jun finally gains his courage to do the right thing and use his gifts against the real enemy.

Animator Hirostugu Kawasaki also made the minor japanimation classic SPRIGGAN, which I can't remember if I saw in anime form or not (though I did read the manga). I guess I actually like LEGEND OF THE MILLENNIUM DRAGON a little better than PRINCESS MONONOKE. Maybe I felt like it was getting somewhere faster and more conclusively, even if the plotline stayed relatively predictable once I got the gist. Even with the mayhem the PG-13 American rating is too harsh, but the material seldom seem childish at all. LEGEND OF THE MILLENNIUM DRAGON is derived, so press notes inform me, from Onigamiden, a popular two-part novel by one Takafumi Takada. I would guess it draws heavily from Buddhist and Shinto mythology, pumped up on steroids, but I'm sure the otaku will correct me. (3 out of 4 stars)
Posted by Charles Cassady Jr. at 12:01 AM