[LAST HOUSE ON THE LEFT screens Saturday October 29th at 9:45 pm and Sunday October 30th at 6:45 pm at the Cleveland Cinematheque.] 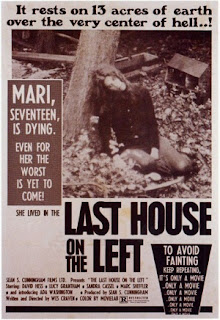 LAST HOUSE ON THE LEFT claims up front to be based on a "true story," but this was a common horror- exploitation gimmick, even before Al Gore invented this internet you're looking at with all its hoaxy PR-hype PARANORMAL ACTIVITY websites. Actually Wes Craven's 1972 debut feature, LAST HOUSE ON THE LEFT is said to be a loose remake of the Swedish art-house classic THE VIRGIN SPRING. LAST HOUSE ON THE LEFT profitably filled grindhouses and grubbier drive-ins throughout the 1970s; 1960's THE VIRGIN SPRING was a stately, medieval tale of a grief-stricken father's revenge on his daughter's murderers booked in art houses. As a Halloween treat the Cinematheque is playing both movies together, so you can do compare/contrast. Either that or to trick the horror nerds of University Circle (speaking of Halloween, good luck with that liberal-arts degree in the job search after college. Be afraid, be very afraid...) into watching a quality picture by accident. And, sorry Fangoria readers, the quality movie is not LAST HOUSE ON THE LEFT.


Oh, it's not the worst thing ever made - though many critics indeed held that opinion at the time. Two rebel ones who didn't were Roger Ebert and the late Gene Siskel, no fools or gorehounds they, who nonetheless thought, along with the cult demographic, that LAST HOUSE was a ferociously effective portrayal of evil and retribution and moral degradation on a visceral level. Okay, I'll admit it has its moments, and Cleveland-area native Wes Craven down the line would prove himself a very good filmmaker indeed. I do wish he would take more sabbaticals from the scare stuff; David Cronenberg did, and angry fanboys didn't tear him asunder. But there's just too much that's wobbly, amateurish and downright silly to make LAST HOUSE ON THE LEFT rise above curio value. Nasty curio value at that.

As the flick opens, teenager Mari Collingwood and her somewhat wilder girlfriend celebrate Mari's 17th birthday via an unsupervised trip to the big city and a rock concert (which the budget couldn't even show). Lured to an apartment by claims of dope for sale, the pair are seized by a trio of escaped convicts, led by the colorfully named Krug, and their moll-girlfriend. Krug and company (which was an alternative title for the movie) toy with the helpless victims at first, but ultimately drive them out to the woods and kill the girls - the villains seemingly even startling themselves with the degree of their sadism and its results.

Fatefully, the culprits' car breaks down near the Collingwood home, where Mari's straight-laced parents, a doctor and his thoroughly domestic wife, politely allow them to stay overnight, and even kind of hit it off with the weird intruders. But the couple still frets over their daughter's absence. When Dr. and Mrs. Collingwood realize that Mari is dead and their visitors are the murderers, they lash out in a night of savage vigilante slaughter, climaxing in an attack with a chainsaw. One character is bitten in the penis during an act of oral sex (nothing explicit shown, but the idea is conveyed hideously), and the question becomes, why are the nice mom and dad any "better" than Krug and the gang when the blood starts flowing?

Maybe by the dope-addled standards of 42nd Street flea pits in the 1970s LAST HOUSE ON THE LEFT was pretty good, but it takes an effort for modern viewers to look past the outdated hairstyles, muffled dialogue and primitive visuals. Especially jarring are the moments of would-be comedy relief and a wildly uneven grab-bag of soundtrack songs, ranging from spacey hippie peacenik ballads to a jug-band and kazoo (!) fanfare over the closing credits; I think I read somewhere the tune was written by Harry Chapin's brother. The early 70s were really culturally weird, I must say, and to think that throughout them I was just a stupid kid in Mayfield Heights watching Saturday morning cartoons and playing with plastic dinosaurs (then again, I think guys do that today who are, like 25 or 26).

A few years ago the now world-famous Wes Craven produced (but didn't direct) a remake of LAST HOUSE ON THE LEFT, once again on the cheap - it was outsourced/filmed in South Africa, though not set there (which is too bad; the cross-cultural stuff might have actually been cool, in a DISTRICT 9 kind of way). But it showed that even with good acting, cameras in focus and properly lit, CGI and atmospheric music, there wasn't much to recommend this material. (1 1/2 out of 4 stars)
Posted by Charles Cassady Jr. at 12:01 AM