The Last Circus (October 28th and 30th at the Cleveland Cinematheque)

[THE LAST CIRCUS screens Friday October 28 th at 7:15 pm and Sunday October 30 th at 8:25 pm at the Cleveland Cinematheque.]
Review by Bob Ignizio 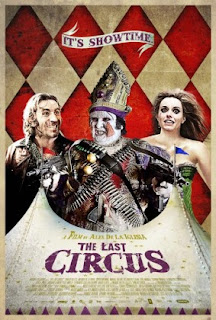 THE LAST CIRCUS (Balada triste de trompeta) is a thematically rich, visually stunning, and delightfully twisted fantasy from one of the modern masters of cult cinema, Alex de La Iglesias (ACCION MUTANTE, DAY OF THE BEAST, DANCE WITH THE DEVIL). The film begins in the midst of the Spanish Civil War with a group of circus performers trying to go about the business of entertaining children, even in the midst of the violence and chaos all around them. The performers try to stay neutral in the conflict, but wind up being forced to fight for the leftist Republican army.


Among the performers is a “happy clown” who ends up attacking the rebel Fascists in full costume armed with only a machete. It might not seem like much against an army equipped with guns, but as the Republican general says, “A clown with a machete? You'll scare the shit out of them.” Alas, a fearsome appearance alone is not enough to save the clown from landing in prison once the Fascists have won the war. The only hope he has left is that his son Javier will avenge him.
Eventually the film moves forward into the seventies where the adult Javier (Carlos Areces) has just landed a job as the sad clown in a second (or maybe even third) rate circus. The troupe is ostensibly led by its ringmaster, but it's really happy clown Sergio (Antonio de la Torre) who calls the shots. He's the star attraction who keeps the tent filled with happy children, so everyone laughs at his jokes and looks the other way when he abuses his girlfriend Natalia (Caroline Bang). Everyone, that is, but Javier. Eventually these two wind up locked in mortal combat over the woman, Javier becoming more and more like the man he hates as time goes on. Eventually both men wind up suffering horrible disfigurement and most likely losing whatever sanity they might have had before their final grand showdown.
On the surface, THE LAST CIRCUS is a completely over the top, dark action-comedy packed with arresting imagery, much of it violent. It's not a horror film per se, but there's plenty here that should appeal to fans of the genre and cult cinema in general. One can certainly take the film at face value, but it's fairly obvious that de la Iglesias has more on his mind that mere shock value.
Read between the lines and you'll see that the three main characters represent the leftist Republicans (Javier), Franco and the fascists (Sergio), and Spain itself (Natlia), with none of the participants coming out smelling like a rose. Whatever love the two clowns profess for their woman/country, it is corrupted by insanity and selfishness. As for Natalia/Spain herself, she's presented as a masochist, perhaps even suicidal. In short, de la Iglesias depicts the left and right as equally flawed and detrimental to the welfare of his homeland, without excusing the country itself for encouraging these two violent opposing forces. I don't know enough about the Spanish Civil War to say whether I consider that a fair depiction or not, but it does make for one hell of a movie. 3 1/2 out of 4 stars.
Posted by Bob Ignizio at 12:01 AM