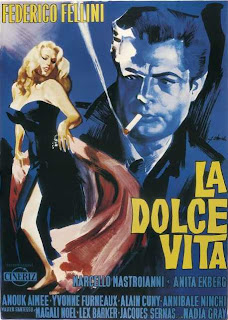 [LA DOLCE VITA screens Friday October 21st at 7:30 pm and Saturday October 22nd at 8:35 pm at the Cleveland Cinematheque.]
Review by Charles Cassady, Jr.
I remember growing up when low-power, analog-transmission UHF channel 23 out of Akron had an extremely limited and rather peculiar library of movies they would show again and again in overnight time slots, when all right-thinking TV stations were off the air and good little boys asleep. Without a VCR or cable in the house (I told my parents it was a shocking expenditure, though eventually they went with a pricey RCA Selectivision to keep up with the Jonses) Channel 23 kind of served as my junior-high film education. I always checked those late-nite listings to see what they had on tap, virtually uninterrupted by commercials.


On a few occasions that weren't school nights I steeled myself to stay up and watch one of the regular attractions, LA DOLCE VITA, all the way through. All three hours. Mama mia, what was I thinking? Even as a schoolboy I was doomed by movies, I guess. Were I to have spent those same pre-dawn hours rebuilding car engines, learning accounting or something useful maybe I would have enjoyed a productive life and career and normal relationships. Damn (or the Italian equivalent). Still, such was the visual power of Fellini's masterpiece-of-masterpieces that I must fault the automotive and accounting industry; if only they could have done things as cool as LA DOLCE VITA to compete, fewer souls like mine would have been lost.
And Fellini's sprawling 1960 spectacle feels more relevant than ever in an era of celebrity obsession and drug- and liquor-fueled decadence; only minor differences between today and the film's mid-20th-century Rome is that Federico's hedonists didn't have reality-TV shows or internet sex videos on TMZ.com to add to their sins. Fellini's camera prowls through the sordid night life and brilliant days of the ancient Italian metropolis, seen through the sunglasses-eye-view of a jaded gossip columnist Marcello Rubini (Marcello Mastroianni). This suave antihero was a once-promising writer who, though maintaining friendships among the intelligentsia, squandered his gifts and is now submerged in the city's trendy moviemaking scenesters and alluring yet grotesque international "jet-set," who both seduce and repel him.
Marcello has a regular mistress (or is it a wife? Hard to tell) who tries to commit suicide over his philandering ways, and he's especially attracted to wealthy heiress Maddelena (Anouk Aimee) who seems to be on a slightly higher intellectual plane than the rest of the gang. Even so, Marcello is smitten, like all males, by an interviewee subject, visiting mega-voluptuous American blonde actress (Anita Ekberg, apparently a Marilyn Monroe/Jayne Mansfield/Maria McDonald takeoff), who has immortal scenes wading in the Trevi Fountain,. But for all his passionate come-ons Marcello just gets a punch-out by her violent husband (Tarzan actor Lex Barker, who was indeed married to Ekberg in real life).
In other disillusioning rambles on the dark side, Marcello is on the case when heartless children fake a "miracle" sighting of the Virgin Mary that winds up getting a crippled pilgrim trampled. A philosopher-friend of Marcello's who seems to have it all - respect, honor, a beautiful wife and children - suddenly snaps and commits a shocking murder-suicide. Marcello tries to get some kind of commitment out of Maddelena that will redeem the two of them, but she's too far gone and apathetic towards him, and the picture ends with a vaguely apocalyptic note of nothing good coming along for these characters after their orgy hangovers.
This was the movie that popularized the term "paparazzi" and is required viewing. If it can be faulted at all, some critics, despite digging the Catholic-guilt mindset, don't find the filmmaker sufficiently disapproving of the social morass he depicts. Rather like David Lynch later on, Fellini seems to be as bedazzled, bewitched and bewildered by the immoral excesses as his hero. I do believe Fellini said this movie was, in fact, more of less a continuation of a story thread in his more neo-realistic 1953 I VITELLONI, about five young, aimless men in the Italian countryside. Marcello corresponded to the Fellini stand-in, a brainy guy who finally left the sticks for the big city - only the sour message here is that Rome corrupted him thoroughly, and Marcello by the end has evidently given himself up for as lost as the rest of the rabble poised at the edge of an incipient collapse of civilization. Anyway, this is one of the must-sees of world cinema, and if its lush temptations are too tempting, imagine how they looked to me as a lonely adolescent watching Channel 23. I wonder how many entertainment reporters were inspired to enter the biz by this movie, for all the wrong reasons, of course. Well, at least John Tesh got out clean, so far as we know. (4 out of 4 stars)
Posted by Charles Cassady Jr. at 12:01 AM