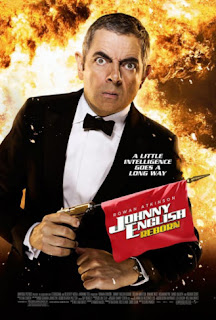 British funnyman Rowan Atkinson returns as the titular intelligence-challenged superspy in JOHNNY ENGLISH REBORN, a follow-up to the 2003 /Working Title James Bond parody.  The royal crown’s answer to Inspector Jacques Clouseau of the French Surete (PINK PANTHER) or Frank Drebin of ’s Police Squad (THE NAKED GUN), English is a determined but catastrophically clumsy crime-fighter whose sleuthing successes are typically manifested by way of accident or third-party intervention.
The sequel is packed with more nods to iconic stunts and gizmo-gadgets from the celebrated Albert Broccoli 007 series:  English spars with a villain while dangling from a cable car tram, a la MOONRAKER.  He parachute jumps from a snowy promontory, paying homage to Roger Moore’s opening gambit from THE SPY WHO LOVED ME.  And Johnny’s principal antagonist owns a well-guarded mountaintop fortress, a la ON HER MAJESTY’S SECRET SERVICE.  There’s also a boat pursuit, an unorthodox helicopter flight, a camera whose lens launches missiles, and a voice-activated Rolls Royce.
Trouble is, the target audience for director Oliver Parker’s lighthearted espionage imitation isn’t old enough to appreciate the 007 allusions—and teens who are will find that the laughs aren’t quite frequent or funny enough.  You don’t have to have seen GOLDFINGER and FOR YOUR EYES ONLY to appreciate the Bond gags, but it helps just as AIRPLANE is funnier if you’ve already seen AIRPORT and its follow-ups.
It’s been five years since English botched an assignment in , where an African official was killed on his watch.  Guilt-ridden, he’s exiled himself to a Tibetan monastery for some mind-and-body reconditioning under the tutelage of a martial arts sage.  But our reclusive hero is pressed back into service when the Chinese premier is targeted by an international bad-guy consortium called Vortex.  It’s a shot at redemption for Johnny—and possibly payback.  A shave, haircut, and tuxedo-fitting later, and he’s back on duty.
English displays remarkable poise during the first half, besting a foe in hand-to-hand combat on a pier and evading a lethal (if elderly) hit-woman whose arsenal includes a machine-gun vacuum cleaner.  He’s even charged with mentoring young agent Tucker (Daniel Kaluuya), a by-the-numbers rookie who lives with his mum and technically isn’t old enough to enter the casino they must scope.  But Johnny and Tucker are booted from the investigation by frustrated lady boss Pamela “Pegasus” Thornton (THE X-FILES' Gillian Anderson) after a couple embarrassing mishaps.  Fortunately, sexy behavioral psychologist Kate Sumner has a soft spot for English—and she’s played by someone with actual Bond Girl experience (Rosamund Pike from DIE ANOTHER DAY).  Sumner helps the boys ferret out the baddies, who have moles in the KGB, CIA and MI7—and who may have been the real culprits in .
Atkinson makes ENGLISH’s 100 minutes tolerable with his malleable face and physical slapstick.  He’s athletic, possessed of great comic timing for his 56 years, and can give as well as he takes when it comes to groin kicks.  Johnny maintains composure even when knocking a cat from a window ledge, attacking his employer’s family with a dinner tray, or eluding the authorities on a tricked-out, motorized wheelchair.  Indeed, the accident-prone agent is best when he’s over-the-top, which will tickle tots—who should be knighted if they manage to keep track of the multiple villains, double-agents, and their agendas. 2 out of 4 stars
Posted by Peter M. Roche at 12:01 AM