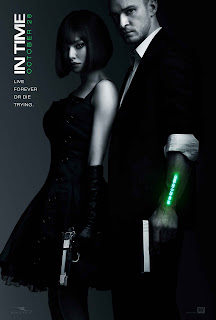 My biggest issue with Andrew Niccol’s 1997 film GATTACA is its overall failure at anything resembling subtlety. The movie’s visual symbolism is boorishly hammy; its structure so transparent, it could match a Robert McKee PowerPoint scene-for-slide. Yet somehow Niccol’s new film, IN TIME, makes GATTACA look like a Martian cryptograph. Playing out like a Sesame Street skit for junior activists, IN TIME manages to deliver an embarrassingly infantile socialist polemic while simultaneously turning a middling hard sci-fi premise into spongy, incomprehensible twaddle. The only things separating it from recent flash-bang, popcorn-nauseated action fare like JUMPER and HITMAN are Coen Brothers-regular Roger Deakins' gorgeous cinematography and Niccol’s own tortoise-wins-the-race, over-cooked writing. And, of course, its abject lack of noteworthy action.


Though I can practically guarantee that the Occupy movement will garner mention in many an IN TIME review, if I were those protestors, I’d distance myself from this thing like it was a Tea Party truce cupcake. On paper, the sentiment lines up – in a future society where humans have been engineered to stop aging at 25, and any subsequent years are earned and spent as currency, the time-flush, blue-blooded 1% lower wages, inflate prices and ghettoize the 99%, all in the name of stony hearted bourgeois immortality. Suffice it to say, the film's pseudo-philosophical pipe-dreaming never manages to escape said paper.
Aside from the “time is money… no, really, time is ACTUALLY money… isn’t that clever?” premise, all you really need to know is that blue collar 28-in-real-time Will Sales (Justin Timberlake) is handed more than a thousand years by a disillusioned centenarian; After being accused of murdering his benefactor, Sales kidnaps a(n initially) reluctant time magnate’s daughter (Amanda Seyfried), and the two have Bonnie and Clyde-type adventures (I use this term loosely to describe stagnant car chases and one yawny rooftop caper) that find them playing Rolex Robin Hoods, while being doggedly pursued by the law-enforcing Deputy of Nottingham, Timekeeper Leon (Cillian Murphy)...
“Deputy” because we never meet a sheriff. Even the Timekeepers are portrayed as pawns of a nefarious caste of elusive would-be immortals, of whom we meet only one – Phillipe Wise, played with predictable coiffed entitlement by Mad Men co-star Vincent Kartheiser - who becomes an unwitting strawman for Niccol’s entire treatise. A treatise that, with all the coherence of an encircled “A” on the back of a 7th-grader’s notebook, hates on anyone who possesses bunches of time – earned or inherited – and essentially suggests that the best way to end a recession is to dump bags of money into the street.To put it in less vitriolic terms, he promotes a redistribution of wealth without even hinting at a reorganization of labor. I guess all that gene-splicing equipment is just going to manufacture itself.
50 minutes says reviewers are also going to do that snarky lead thing where they say, “IN TIME is a waste of time,” or, “IN TIME will find you checking your watch.” Memo to critics: you don’t need to. This movie makes so many cheesy jokes about time, it’s almost as if Niccols is trying to quash the inevitable Saturday Night Live parody with a pre-emptive time-pun carpet-bombing. There’s a 99 second store. Homicidal time bandits, called Minutemen, refer to murder as cleaning people’s clocks. Second and third generation aristo-brats are said to “come from time.” These moments are not managed with a self-conscious half smile. The movie is serious. The language of our hypothetical future socio-economic paradigm may as well be based on Laffy Taffy wrappers and Bazooka Joe comics.
The film is beautiful, by the way. The sets, props and costumes are all built extra sleek; the blocking is loose, but precise; and there isn’t a single frame that feels cluttered. The movie embodies all the visual efficacy of commercials for upscale automobiles... and features an array of futuristic upscale automobiles (a questionable indulgence Niccols justifies by explaining that dag nasty rich folk just display a fancy car, while bodacious poor folk, upon getting their hands on one, actually drive it). And say what you want about the woefully under-explored premise, the 25-year age stasis allows Niccols to populate the film – second-scrounging ghetto to decade-doffing Xanadu - with ludicrously attractive people. (Come to think of it… he did the same thing in GATTACA. It almost makes you wonder if he wouldn’t be more happy pitching pilot concepts to the CW.)
I want make it clear that I don’t dislike IN TIME for attempting to inspire thought. It is rated PG-13, after all, and I’d hate to begrudge any misfit high schooler an experience that might imbue within him or her the first stirrings of revolution. The film brings up some decent points – it touches on the concept of inflation in a beginner-friendly way, and provides example (after example after example) of relatable economic injustice – things that could ignite within adolescents the sort of undirected humanist anger that, in adulthood, leads people to activism and, if they're strong (and lucky), real social change. But instead of leaving viewers to their thoughts – to their own anger – it appropriates that blind rage and focuses it on a single, irrational solution. It values the act of revolution over the critical thinking required to build a better system in its wake.
And, seriously, they actually threaten to clean people’s clocks. (1 1/2 out of 4 Stars)
Posted by Matt Finley at 12:01 AM