The Imperialists Are Still Alive! (October 15th and 16th at the Cleveland Cinematheque)

[THE IMPERIALISTS ARE STILL ALIVE! screens Saturday October 15th at 7:30 pm and Sunday October 16th at 8:35 pm at the Cleveland Cinematheque.]
Review by Bob Ignizio 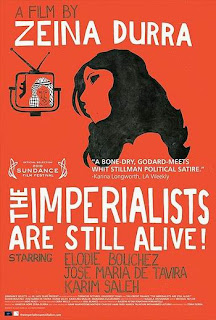 French by birth but of mixed Lebanese and Palestinian heritage, Asya (Élodie Bouchez) is a “conceptual artist” (fancy talk for being an artsy photographer) living in New York City. She goes to exclusive night clubs with her friends, attends “environmental dance” performances with her new Mexican beau Javier (José María de Tavira), and engages in other New York hipster activities. However, her fun is undercut somewhat by having to worry about a friend who may or may not have been arrested as a suspected terrorist (we never do find out for sure) and concern for her brother who is living in Lebanon during a period of heavy Israeli bombing.

THE IMPERIALISTS ARE STILL ALIVE! is a little bit AFTER HOURS, a little bit Woody Allen, and a little bit Absolutely Fabulous (although Asya and her friends are considerably smarter and more likeable, even at their most affected, than Patsy and Edina), all of it with an Arab-American flavor. Much of the film's humor comes from the arty pretensions of Asya and her friends, as well as the paranoia she lives with. Her constant worrying that the government might be watching her or bugging her apartment/studio, a residence even the Iraqi refugees she photographs early in the film describe as shabby, leads to some enjoyably screwball situations. At the same time, the film is careful to show that Asya's concerns aren't completely unjustified, and that beneath her hipster facade is a strong, intelligent woman.
This is writer/director Zeina Durra's first feature, and she shows a lot of promise. Rather than go for the huge laughs, IMPERIALISTS maintains a consistent level of light, witty humor throughout. It also deftly handles its more serious themes about the issues facing Arab-Americans in post-9/11 America, even those as reasonably well assimilated as Asya and her friends and family. Durra keeps her plot structure loose without letting her film meander aimlessly. Not all of the plot points are resolved, but a pat ending that ties everything up neatly wouldn't have felt right. Any lingering questions are intentional, and the film ends right where and how it should. 3 1/2 out of 4 stars.
Posted by Bob Ignizio at 12:01 AM