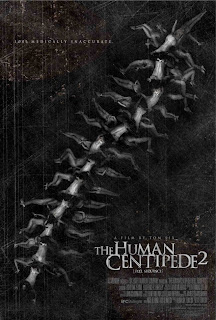 We all know that when supernatural monsters like Dracula, Michael Meyers or even Godzilla get killed in their movies, a way can always be found to bring them back for a sequel if there's money to be made. But when you have a human monster like THE HUMAN CENTIPEDE (FIRST SEQUENCE)'s Dr. Heiter, it's not so easy. So when filmmaker Tom Six decided to make a sequel to his controversial horror film, he decided instead to get all meta.
THE HUMAN CENTIPEDE II (FULL SEQUENCE) centers on Martin (Lawrence R. Harvey), an obese middle aged mental defective who lives with his mother and is obsessed with the previous film to the point that he wants to act out the scenario for himself. Martin isn't content to merely duplicate Heiter's 3 person centipede, though; he wants to up the ante by sewing together a dozen poor souls. There is one surprise that ties this film in with the first that you no doubt can discover by searching on the internet, but I won't be the one to spoil it.

I do miss Dieter Laser's scenery chewing performance as Dr. Heiter, but Harvey's Martin is a more than suitable, and very different, substitute. Unlike the suave and loquacious Dr. Hater, Martin looks a bit like Uncle Fester crossed with Peter Lorre and doesn't say a word the entire movie; he communicates only with grunts and squeals. Using his job as a parking lot security guard to find victims, he soon has all the pieces he needs for his creation stowed away in a rented warehouse waiting to be assembled. Since he has no medical training, however, his process for making a human centipede is a much messier affair.
It's unclear if Six means for Martin to represent his own derogatory view of horror fans, or if he's parodying the derogatory assumptions detractors of the genre make about them. On the one hand, you could say he's giving those fans of the genre who complained about the first film not being graphic enough exactly what they wanted while rubbing their noses in it by portraying them as a grotesque stereotype. On the other hand, he could be commenting on those who labeled his previous film “torture porn”, ofen without atually seeing it, by showing them what such a movie would really look like. Maybe he's taking aim at both sides. Either way it's an awful lot of unpleasantness to wade through.
THC II is shot in grainy black and white that does little to diminish the power of its grisly imagery. The first film was by no means bloodless, but this time around the more disgusting concepts that were only implied a before are shown in graphic, unflinching detail. There's also a distinct lack of the humor and sense of fun that made the original's ghastly premise not just tolerable but, at least to this viewer, downright entertaining. Nor are any of the victims fleshed out as real characters as in the first film, leaving the audience with no one to root for. It's just kind of mean and miserable, and to some degree left me wondering why I was watching it (oh yeah, I had to write this review).
For better or worse, this is the movie I think a lot of viewers expected to see when they sat down to watch THE HUMAN CENTIPEDE (FIRST SEQUENCE). If you like your horror grim and uncompromising, you've got it. The film is also, like its predecessor, very solid on a technical level. Where Six made the most of his color palette last time around, here he shows he's equally adept at shooting in monochrome. Most of the cast has little to do other than be tortured, but Harvey turns in a memorably unhinged performance. I can't really say I liked this movie, but those whose taste in horror is a bit darker and nastier than mine may feel differently. 2 1/2 out of 4 stars.
Posted by Bob Ignizio at 12:01 AM