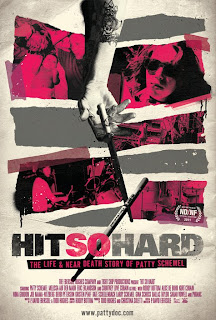 What distinguishes HIT SO HARD from other run-of-the-mill “Rockumentaries” is that not only is its subject a girl who made a name for herself in an exclusive boys club—but also a lesbian in a land of lascivious, guitar-playing Lotharios.
Patty Schemel seemed poised for rock stardom in the mid-Nineties. The diminutive drummer from , was smack dab in the middle of the scene when grunge took root.  The cultural shift meant more to Schemel than just flannel shirts and ripped jeans.  She’d grown up gay in an intolerant small town and already spent years defining herself with music.  An early stint in punk group The Primitives lead to a gig with Doll Squad, who eventually shared a bill with then up-and-comers Nirvana.  Schemel fraternized with local musicians—including Kurt Cobain and [Faith No More keyboardist] Roddy Bottum—and was in the right place at the right time when Courtney Love decided to take her alterna-rock outfit Hole to the next level.

HIT SO HARD chronicles Schemel’s turbulent time with Love and company, following her career trajectory from high school fringe femme to Rolling Stone cover girl, from unrepentant heroin addict to homeless crack whore.  It’s a gritty, dark, and sometimes sad look back for Schemel, who offered her own archival footage of life backstage with Hole to juxtapose director P. David Ebersole’s more recent on-camera interviews with friends, family, and former band mates.  The video snippets of the Nirvana front man playing with daughter Francine provide insight into the lives of the soon-to-be icon, and will surely intrigue fans of the Sub Pop set.  Ebersole paints an intimate, sympathetic portrait of Schemel; we’re drawn to Patty early on and ache when her lust for life fizzles midway through the Behind the Music-styled biopic.  She seems authentic, vulnerable, and trustworthy—and by the time her tale concludes we want to discuss it with her over beers.
Schemel and Love became unhinged after Cobain’s sudden suicide—and when bassist Kristen Pfaff succumbed to heroin two months later, Patty self-medicated with the very chemicals that claimed her friends.  To guitarist Eric Erlandson and newcomer Melissa Auf der Mauer it seemed she would be the next 27-year old to fail rock and roll’s “Saturn Return” life challenge.  The last straw arrived in 1998, when a chauvinistic producer replaced Schemel’s parts on Hole’s acclaimed Celebrity Skin with those of a “Johnny One-Take” session man.  Crestfallen, Patty disappeared, squandered her savings, and resorted to survival sex on the streets.
Recovery took years—and had more to do with dogs than drums.  No one was more delighted by Patty’s comeback than her mom—one of those sweet, ready-to-be-canonized matriarchs boasting a reservoir of unconditional love.  Erlandson, Love, and Auf der Maur are key commentators, while other cameos include Debbi Peterson (The Bangles), Gina Schock (The Go-Gos), and Nina Gordon (Veruca Salt).  HIT is a compelling account of the rise, ruin and redemption of a fallen grunge princess—and very likeable (if admittedly fallible) woman.
3 out of 4 stars.
Posted by Peter M. Roche at 12:01 AM