[FALLEN GODS screens Friday October 14th at 9:20 pm at the Cleveland Cinematheque. Annia Bu Maure, one of the stars of the movie, will answer audience questions after the screening. Adults only!]
Review by Bob Ignizio 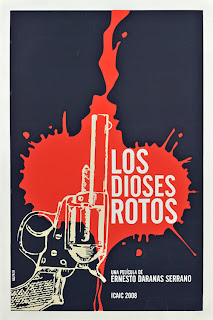 The Havana of FALLEN GODS (Los dioses rotos) is a hotbed of torrid, tangled love affairs and deadly double crosses populated mainly by prostitutes and pimps. Laura (Silvia Aguila) is a naïve teacher who enters into this world to interview its denizens for her thesis about turn of the century procurer Yarini Ponce de Leon. Yarini is revered as something of a folk hero for standing up to a French pimp. He was killed by his rival, but his death set the stage for an uprising that resulted in the French leaving the island.

They myth of Yarini continues to resonate in the streets of the city, and Laura speaks with several prostitutes looking for answers as to why. She also talks to Rosendo (Héctor Noes), a contemporary pimp who claims to have a scarf soaked in Yarini's blood. Rosendo is at odds with Alberto (Carlos Ever Fonesca), a former pimp who wants to leave his old lifestyle and the country behind. Both men vie for the affections of Sandra (Annia Bu Maure), who has just been released from prison. Despite their conflict, Rosendo enlists Alberto to teach the teacher a lesson when she continues to press him about having the scarf tested for DNA to establish its authenticity. That's not to say Rosendo is willing to let bygones be bygones, though.
Through this convoluted plot, writer/director Ernesto Daranas tries to examine the national mindset that led Cubans to elevate such an ulikely figure as Yarini to legendary status and the effects that reverence continues to have on the present. But mostly, it's just sexy, soapy fun replete with lots of softcore couplings and characters whose allegiances arefrequently in doubt. The actors add to this vibe with performances that come dangerously close to being over the top. It's not quite on a par with the acting in a Mexican telenovela, but it's not that far off, either.
It would all be a lot more enjoyable if not for Daranas' direction. I admire his vibrant color palette and sense of energy, but his constant need to inject “style” into the proceedings quickly becomes annoying. The editing is fast and choppy, there are way to many freeze frames, and the camera often seems to be moving just for the sake of moving rather than for any discernible storytelling purpose. He does pull off some nice shots here and there, but for the most part it feels like he directs like a hyperactive child unable to stay focused on anything for more than a few seconds.
The most interesting thing about FALLEN GODS, at least to me, was just how western it felt. I didn't detect any communist propagandizing, and the film's portrayal of the dark underbelly of Cuba's capital is hardly flattering. Even more surprising, then, that the island country would submit this as their official entry in the “Best Foreign Language Film” category for the 2008 Oscars. I'm less surprised that it didn't make the short list, but despite its flaws the film is still reasonably fun to watch. 2 1/2 out of 4 stars.
Posted by Bob Ignizio at 12:01 AM