Elephant in the Living Room (now on home video) 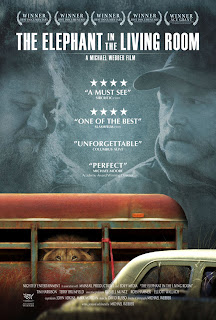 
The tragic case in Zanesville, with the release of an exotic-animal menagerie by an unstable, amateur-nite keeper and the creatures' subsequent extermination by downstate police, scores yet another low point in animal welfare for good old clodhopper-capital Ohio. Wildlife officials in other states look at this place and cringe. And to think our governor, in his Republican business-deregulation wisdom, did away with a general ban on the exotic and dangerous animal trade in the name of the almighty dollar. Maybe the idea is to solve our crushing debt by selling premium-grade hunting licenses to the gun-toting bubbas, for whenever hoarded lions, tigers and grizzlies regularly get loose. There's entrepreneurship for you. Somebody ring up COSE.


Yes, there are a variety of bizarre animals in Buckeye State, and not just the two-legged variety. Head out to the boondocks some weekends and you can find wild cats, primates, bears, reptiles, parrots and tropical birds, even a hyena or giraffe from time to time, being peddled at basically unsupervised auctions. And every once in a while someone gets mauled by a pet leopard or chimpanzee or something. It's not a very good outcome for anyone concerned, except the dealers, of course.

This was all brought out vividly last year by a cautionary shot-in-Ohio documentary entitled ELEPHANT IN THE LIVING ROOM, which I picked as one of my ten top films of 2010 (this year I don't think I've got even four top movies yet). ELEPHANT IN THE LIVING ROOM had a slot at the 2010 Cleveland International Film Festival and, I think, a single rented screening at the Cedar Lee and that was pretty much it for Cleveland. Guess that's what comes of forgetting to cast Betty White.

After the Zanesville tragedy I checked and found that the documentary went to DVD in April. I stand by my verdict that it deserves to be seen a lot more than that "Hot in Cleveland" sitcom thing is that gets fact-checked weekly by the daily newspaper, who one would think would have bigger fish to fry.

Actually fish are just about the only dangerous animals not seen roaming this territory in ELEPHANT IN THE LIVING ROOM. Filmmaker Michael Webber’s cameras principally follow Tim Harrison, a Dayton animal-control specialist who has found himself more or less the go-to-guy for the entire region, running a tiny, underfunded operation devoted to securing out-of-place critters on the loose in the heartland - usually when they get too big/unmanageable for the jerks who purchased them. It's no "Crocodile Hunter" fun when the soft-spoken hero is confronted with deadly tropical vipers, attacking cougars and abandoned bear cubs, and there's one heckuva scene in which Harrison learns that a couple of Dayton kids had been innocently toying with one of the world's most deadliest snakes that they just found by a garage. It's a miracle the boys didn't die.

There are some visits to other parts of the country - one sad visit to Florida, for example, finds the snake problem is really out of hand, as giant pythons and boas are just set loose in the bush. Sunshine State zoos are all full up, so one mammoth serpent, just minding its own business by the road, has to be summarily shot by an official who has clearly done this thing too many times.

But it's back to the Rust Belt for the narrative that give the film its backbone, a study of an animal hoarder up close. He's a disabled, Dayton-area trucker who has a pair of majestic, enormous African lions crammed into inadequate cages on his property. Webber goes to heroic lengths to be sympathetic to this worst-Ohio-neighbor-nightmare, and I was surprised to the extent that he succeeded. The scruffy Yosemite Sam-lookalike on crutches isn't on a macho-dick power trip or needs the fangs and claws to guard his dope crop or rap CD collection. He lovingly raised the lions from cubs, and claims to have permanently bonded to the huge cats; they're his therapy from constant pain. Meanwhile he flip-flops frustratingly over the prospect of whether to agree to send the animals to any of the few outside sanctuaries capable of caring for such formidable carnivores. Then biology takes a startling and bittersweet turn... There's a tear-jerking finale, guaranteed, but it isn't as horrible as the Zanesville mass-slaughter.

Maybe if more viewers had heeded this movie's warnings all that Zanesville horror wouldn't have gone down. Oh, sure it would. I just knew when I watched ELEPHANT IN THE LIVING ROOM there were still rubes who would take home only one lesson, that they could go online or drive into Amish country and score cool lions, black mambas, cheetahs, gibbon apes or Andean condors for their own back yard (or apartment closet), while so many domestic cats and dogs get put down.

Still, if any nonfiction movie should have your attention while the Zanesville incident lingers in the news giving Ohio a well-deserved black eye, it's ELEPHANT IN THE LIVING ROOM. Even though watching is now the equivalent of closing the barn door after the Siberian tiger has already gotten out. (3 1/2 out of 4 stars)
Posted by Charles Cassady Jr. at 12:01 AM