[DETECTIVE DEE AND THE MYSTERY OF THE PHANTOM FLAME opens in Cleveland on Friday October 14th exclusively at the Cedar Lee Theatre.]
Review by Bob Ignizio 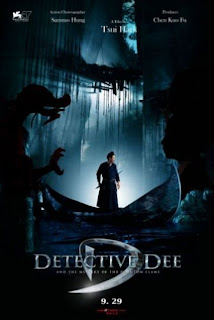 In 7th century China, the country's first (and only) female ruler, Empress Wu Zeitan (Carina Lau), is about to begin her rule. Many in the land are unhappy about this, so when two imperial officers mysteriously burst into flames while inspecting the giant Buddha statue built to commemorate Zeitan's ascent to the throne, there is no shortage of potential suspects. To get to the bottom of this mystery, the Empress enlists the help of Detective Dee (Andy Lau), a man she had sent to jail some years prior for speaking out against her. To keep an eye on the detective, the Empress assigns her right hand woman Shangguan Jing'er (Li Bing Bing) and Supreme Court Justice Pei Donglai (Chao Deng) to assist Dee in his efforts.

Early on Dee comes across as something of a Chinese Sherlock Holmes, with Jing'er as his Watson and Pei somewhat like Lestrade. But as the film goes on it becomes apparent that Dee can't trust anyone. Everyone is a suspect, even Dee's own assistants and old friends like Shatuo Zhong (Tony Leung Ka Fai), the man in charge of the Buddha’s construction. With all the various political factions out to do him in as well, or at least hamper his investigation, Dee has as much in common with one of Bogart's hard boiled gumshoes or Jack Nicholson's Jake Gittes as Conan Doyle's Victorian sleuth.
DETECTIVE DEE AND THE MYSTERY OF THE PHANTOM FLAME (Di Renjie) is directed by Tsui Hark, one of the leaders of Hong Kong cinema's “new wave” back in the eighties. Whether directing or merely producing, Hark has always brought a western influence to bear on his films and DETECTIVE DEE is no exception. He's done everything in his power to make this film a crowd pleaser not just for Chinese audiences, but for the world, packing it with exciting action sequences, clever comic relief, and a genuinely engaging mystery.
Hark also made a smart choice by hiring martial arts legend Sammo Hung, perhaps best known to U.S. audiences for his TV series Martial Law, to stage and direct the fight scenes. Hung's choreography delivers elegant and graceful ass-kicking, and Hark shoots it all in a manner that is visually interesting while still making sure viewers can actually tell what's going on.
As much fun as the fight scenes are, though, it's the mystery that really drives this film. You may or may not be ahead of the good detective when it comes to figuring out who the culprit is, but the twists and turns the plot takes to reach its conclusion are fun either way. 3 out of 4 stars.
Posted by Bob Ignizio at 12:01 AM