Christmas in July (October 22nd and 23rd at the Cleveland Cinematheque) 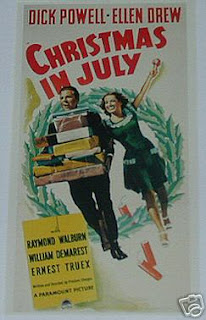 Not to offend the Giant Eagle supermarket chain (who, after all, could really benefit by advertising on the Cleveland Movie Blog; surveys show some of our readership can actually still afford to buy food), but what does that slogan of theirs actually mean? "It takes a giant to make things simple." Huh? It…takes…a giant…to make…things…simple...Don’t get it. Kind of sounds like a malaprop foreign-policy statement the most recent President Bush might have uttered before launching Operation Iraqi Freedom. Something that would trickle down to the East Texas supporters like this: "Saddam's got giants?! We gotta invade! And send those Dixie Chicks to Gitmo!"


We sort of wandered off the topic, but a cryptic slogan like that is central to CHRISTMAS IN JULY, a 1940 Paramount comedy that was early in a cycle of top-drawer farces written and directed by the brilliant Preston Sturges, a cycle that would continue through the war years with SULLIVAN'S TRAVELS, THE LADY EVE, THE MIRACLE OF MORGAN'S CREEK, HAIL THE CONQUERING HERO etc. The setting here is multi-ethnic NYC, where Jimmy McDonald (Dick Powell) works at a sterile desk as a wage-slave accountant for a coffee company and hopes to someday make enough money to marry his sweetheart Betty (Ellen Drew) from the office secretarial pool. Jimmy fancies himself an ad-catchphrase prodigy and has entered what he thinks is his best work in a slogan contest by the much bigger "Maxford" coffee corporation. Jimmy's entry, "If you can't sleep, it's not the coffee, it's the bunk," doesn't make sense to anybody but him. Still, he's sure he's a shoe-in for the grand prize of $25,000.
Only 25K? Cuyahoga County officials steal that much before breakfast. Still, it's a big deal by Depression-era (the 1930s Depression, that is) standards, and while the Maxford contest is hilariously deadlocked because one stubborn contest judge can't make up his mind (it's William Demerest, a fixture of Sturges' films), a conspiracy of Jimmy's co-workers fake a telegram to the guy that he's won the prize just to see how he reacts.
The prank immediately snowballs out of control in a manner that will be slightly familiar to readers of Mark Twain's "The Million Pound Note." Jimmy announcing his windfall on the office floor makes him an instant star of the company and he's promoted to a corner office in no time to work on ad campaigns. Via a miscommunication, the Maxford president does give Jimmy his $25,000 check - but with nobody able to cash a fortune like that, his shopping spree is full of freebies and gratuities from grateful Manhattan merchants. Jimmy's newfound confidence and generosity transforms his crowded tenement neighborhood into a veritable carnival - until the truth comes out, that it was all a hoax. Then there's a trick ending that's so utterly obvious you might not see it coming. Oh, sure you will.
The premise here is fairly simple, as is the brief running-time - barely an hour long, enough to play on double-feature matinees. Sturges' other films would get a bit more elaborate and profound; compared to them this is more like a sketch or doodle, with some good insights into human nature, a handful of great character-actor performances, some sharp-jab jokes (Jewish merchants who suddenly turn ornery toward Jimmy and his friends when his wealth evaporates are compared to Hitler and Mussolini, yeeeoww!). CHRISTMAS IN JULY is pleasant enough, and its nostalgia quality beyond question, but it does seem to be a mere trifle compared to other Sturges classics. Of course, measuring up to the likes of SULLIVAN'S TRAVELS would be a tall order for anybody. Just know that this corresponds to just about any pleasant, slick PG-13 rom-com today that's quickly forgotten after the DVD release, and there you have it. (2 1/2 out of 4 stars)
Posted by Charles Cassady Jr. at 12:01 AM