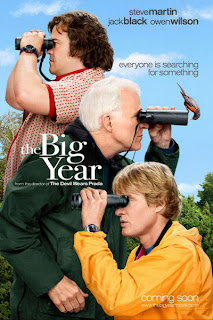 Back in 2007, CBS News dubbed bird-watching the “fastest-growing sport in America,” citing that, with 75 million participants, this unlikely “spectator sport” had attracted more fans than NASCAR. With a built-in demographic of that size, by-the-numbers birding comedy THE BIG YEAR could’ve been all woodpecker taxonomy jokes and sarcastic rejoinders about binocular etiquette, and still made a mint. Instead, director David Frankel (THE DEVIL WEARS PRADA, MARLEY & ME), in his third effort to tap nonfiction writing for its core-lurking emotional sap, has made a film intended to appeal to everyone. The result is a wholly generic, breezily innocuous 100 minutes of road-tripping, life-affirming, bird-watching fluff. Now, go back and re-read that last line without all the sarcasm in your head-voice. See – that description doesn’t have to make the movie sound terrible. (Admittedly, the tagline - “Everyone is searching for something” – kinda does).

If the film itself is inoffensively generic, the title seems downright banal. What I didn’t realize (no thanks to the bizarrely mismanaged slapstick ad campaign) is that “The Big Year” is a truncated version of “The North American Big Year,” the name of an annual friendly competition between dedicated birders to see who can spot the most species of birds over the course of (duh) a year. There, also, is the loose plot of the film, which is based on a nonfiction retrospective of 1998’s Big Year competition written by Denver Post journalist Mark Obmascik. The film, like the book, follows the competitive, country-trotting exploits of three Big Year hopefuls – schluby, wayward divorcee Brad Harris, played by Jack Black (MARGOT AT THE WEDDING version ); weary, near-retired corporate bigwig Stu, played by Steve Martin (FATHER OF THE BRIDE version); and cocky contractor and past Big Year record holder Kenny Bostick, played by Owen Wilson (THE ROYAL TENENBAUMS version… but with a hidden, Luke Wilson-type inner sadness.)
Also, they’re all searching for something, a fact of which the film repeatedly reminds us by having the characters reflect on the natural traits and behaviors of different birds… traits and behaviors that reflect the characters’ own social and domestic shortcomings or aspirations. And it’s fine that Brad is lost and lonely, and that Stu equates retirement with death and that Bostick futilely strives for something larger than conventional happiness, but that the resolutions to these issues come in such pat, pre-packaged moments – especially given the vast and varied scope of the film’s natural settings – is unfortunate.
1998’s Big Year was uncharacteristically exciting, as El Nino’s chaotic squalls flung dozens of foreign species out of their standard migration paths and into the eye-line of determined American birders. While the film hints that these meteorological tantrums also brought together three disparate men, these guys aren’t birds cast upon foreign shores, fighting alien winds… They just plain lack the raw self-awareness needed to identify the mundane latitudes over which they’re stumbling. The movie, of course, sells their tardy realization as bold revelation.
If you have any questions as to the film’s structure, remember that it a) takes place over the course of a single year, and b) involves counting things. This translates to a vignette-based architecture that finds the screen alternately peppered with date markers and rolling counters that keep us up to date on the status of the competition. Gimmicky? Fortunately, not overtly – the visual devices fit the film’s playful tone almost to the point of obviousness. The only time they become intrusive is in the third act, when Frankel stops using the counter as a means to build artificial tension. That, and, like all blatant structural tools, they sometimes feel like a crutch, serving to neatly portion out the story while half-developed subplots and insubstantial side characters flit in and out of the film like nectar-tweaked hummingbirds. Additionally, Jack Black’s character is also somehow the omniscient narrator - a fact that wouldn’t be nearly as confounding if the movie didn’t feature a woefully underdeveloped birding blogger who intermittently (read: when its necessary to the plot) tracks and comments on the competitors’ birding escapades.
The film does do its best to sell birding as something more than an eccentric hobby or cartoonish obsession, and some of the ornithological content is legitimately fascinating, but, in the end, equating (I won’t be so saucy as to say reducing) the behavior of birds one-to-one with the scripted fumblings of mediocre film characters takes away all that is wild and sublime about deserts, and forests and the endless sky. But if you’re just looking to kill an afternoon, and NASCAR’s on hiatus, THE BIG YEAR is a film to which you can bring the whole family. No one will have to flinch at a gunshot or blush at boot-knocking or groan at a fart joke. Actually, given the stock, all-ages nature of the content, I was surprised that 20th Century Fox didn’t hold the release until Thanksgiving. Marvel at a cavalcade of glorious birds… and then hack up and devour a giant, ugly one. Okay, maybe I’m not that surprised. (2 1/2 out of 4 Stars)
Posted by Matt Finley at 12:01 AM