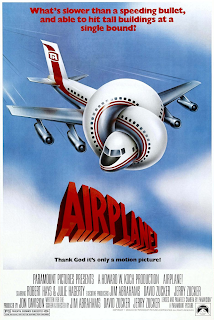 Being older than dirt (poorer, too), I can remember when the original AIRPLANE! came out. Critics who earned even bigger paychecks in 1980 than I would ever get 30 years later, they practically all copied from each other (and to think, cut-and-paste off the internet barely existed then except at some elite military installations) in lumping the hit comedy-parody in with NATIONAL LAMPOON'S ANIMAL HOUSE and MEATBALLS and STRIPES as among the popular "slob comedies," of extreme rude behavior, beer and boobs and low-class buffoon-hedon heroes triumphing over snobs and authorities.

I desperately wanted to say at the time, you guys (or in the Plain Dealer's case, girls) are tools. I'm in high school and I know where this movie is coming from, and it wasn’t Bluto and Otter starting food fights. Literally it was a direct descendent of 1970s sketch-parody pictures such as THE GROOVE TUBE, TUNNEL VISION and the great KENTUCKY FRIED MOVIE, this last indeed made by AIRPLANE!'s team of Jim Abrahams, David Zucker and Jerry Zucker.

AIRPLANE! also had parody DNA owing, yes, a bit to Mel Brooks and Saturday Night Live, but more than ever it took me back to the glory days of old Mad Magazine. Classic William Gaines Mad Magazine, when Wallace Wood was the primary artist, Ernie Kovacs on the writing team, and parodying other comic strips was the standard issue. Each panel of a printed spoof would burst forth from the page with ideas, visual (and dialogue) puns, and silliness. You could read it over and over again and just savor the richness. That's AIRPLANE! to me, a beautifully timed bit of fast-paced irreverent satire that doesn't let you get bored for a minute.

Sure, some of the topical humor is dated; I wonder how many CWRU students today will get the gag cameo by the late California tax reformer Howard Jarvis. But a lot of the picture holds up beautifully, a savage lampoon of the AIRPORT, TOWERING INFERNO, EARTHQUAKE all-star soap opera catastrophe genre. I've most often seen 1958's John Wayne Oscar nominee THE HIGH AND THE MIGHTY cited as the template for this aviation thriller, with the essential premise that crew of a giant airliner all get disabled mid-route (here by food poisoning), and it falls to disgraced ex-pilot Ted Striker (Robert Hays), traveling as a passenger, to take over the cockpit and land the mighty machine safely.

On this narrative thread are strung gag cameos by the likes of Kareem Abdul-Jabbar and Jimmy "JJ" Walker, pokes at SATURDAY NIGHT FEVER, JAWS and others, epic slapstick sight gags, nonstop visual and verbal puns ("Surely you can't be serious?" "I am serious. And don't call me Shirley"), and mockeries of some infamous big-budget clichés. That a cheerful female singer-guitarist is aboard the imperiled plane is a direct steal from the ostensibly non-comedy AIRPORT 1975, and it's satisfying to report that AIRPLANE! helped bury the 1970s disaster-flick genre in the hole it deserved (though disaster cinema crawled out again 20 years later with the advent of fancy CGI f/x making possible the likes of TWISTER, VOLCANO, an upgraded POSEIDON ADVENTURE etc.).

Part of Zucker-Abrahams-Zucker's genius was not to cast established comedians but unknown leads Robert Hays and Julie Hagerty, supported by stolid matinee-idol types like Leslie Nielsen, Robert Stack and Peter Graves ("Do you like gladiator movies?") loosening up and goofing off. Leslie Nielsen would almost never be taken seriously again (and he, along with Stack and Bridges, seemed to thoroughly enjoy the career second wind in daffy comedy). The Z-A-Z team practically created a genre unto themselves with AIRPLANE!'s success, and their followup comedies TOP SECRET! And MAFIA! (aka JANE AUSTEN'S MAFIA) are underrated and worth checking out, overshadowed by the more profitable HOT SHOTS and NAKED GUN series.

Of course, the baton was picked up by the Wayans Brothers (SCARY MOVIE), Pat Proft (WRONGFULLY ACCUSED) and, lately, Jason Friedberg and Aaron Seltzer (EPIC MOVIE, MEET THE SPARTANS, etc.). None of these won awards, and some wear out viewer patience before long, but they still manage to drag the laughs, kicking and screaming if need be, out of their Hollywood pop-culture mashups. And it all took off with AIRPLANE! (4 out of 4 stars)
Posted by Charles Cassady Jr. at 12:01 AM