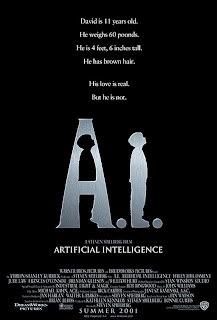 Robots equals big box-office, right? The TRANSFORMERS movies, without a brain in their mechanical heads, are licenses to print money (and action figures). And Steven Spielberg - who co-produced TRANSFORMERS, remember - is next doing an adaptation of Daniel Wilson's war-against-robots novel Robopocalypse (which I've just finished reading; let's just say that, as with Jaws, odds are the movie will be better). Who can imagine a robot epic that doesn't draw crowds?


Spielberg, for one. His 2001 summer offering A.I. ARTIFICIAL INTELLIGENCE was one of the less-seen outings for the crowd-pleasing director, doing meager business everywhere but in robot-fascinated Japan, where it was quite a hit. In Japan, of course, you can bet everyone's been robot-happy ever since the first western-style boss looked at the first salaryman to drop dead from overwork and wondered, "Can we make these things cheaper/more durable?"

But more to the point, Japanese philosophy sort-of endows artificial creations, especially tools, with souls of their own. Thus the idea, oft rendered in manga and anime, of thinking machines have always appealed to the Eastern notion of where human qualities overlap with automaton ones. That same question pervades A.I. - more so than the car chases and the behemoth fistfights and juvenalia that now pass for cinema roboto.

Solemn opening narration explains that A.I. (distantly drawn from a Brian Aldiss short story) takes place in the mid 21st century, when global warming has melted polar ice caps, submerging NYC, creating wordwide social upheaval and lowering the human birth rate (and making Al Gore, really, really smug, I bet). With the decline of humans a subculture of intelligent humanoid robots arises to do menial jobs while mankind is on the ropes. A cybernetics manufacturer (William Hurt) proposes a new category of `mecha,' a robot boy programmed to love and give solace to childless human couples.

Months later the prototype, David (a very perfectly cast Haley Joel Osment) is placed with an affluent family whose natural son is in cryogenic limbo, stricken with a fatal illness. After her initial reluctance, the mother breaks down and activates an algorithm that will make the surrogate David love her blissfully and irreversibly.

Then the unplanned happens. The family's flesh-and-blood son recovers from his coma. Being in a treacherous, Jealousy-stained home was not part of the program, and soon the innocent boy mecha who only wanted to be loved is expelled outside the household and into a strange, twisted world, one that Spielberg has thus far slyly concealed from us. It's a BLADE RUNNER-esque landscape in which unwanted and disposable droids are hunted, scorned, persecuted, prostituted and, worst of all, sadistically tortured and destroyed for cheering crowds of human yahoos in a carnival-like auto-da-fe called the "Flesh Fair," which seems like a real literary contrivance, but which you can bet some creepy Cleveland performance artist will try someday in the Ingenuity Festival.

Unlike Ridley Scott's homicidally rebellious `Replicant' androids, the abused mecha of A.I. are too gentle a bunch of quasi-souls, and they lack the malice in their circuitry to fight back - either that or they are simply better and more ethical than us. David can only seek refuge with a flamboyant, freelance robot gigolo (Jude Law) who briefly guides the boy through this hellish new environment. It's by far the strongest and darkest part of the picture.

A.I. was for years discussed and prepared as a Stanley Kubrick property, but the famously slow-moving and deliberate Kubrick died before much of his pre-production version could be completed. Spielberg, for good or ill, took charge and finished the epic. Whilst Kubrick was generally a pessimist about things, Spielberg has always subscribed to mainstream uplift. Thus lynch mobs here morph into saviors, near-divine beings from the sky come to the rescue, and the last act of A.I. set new standards for sheer, shameless Hollywood wish-fulfillment. That may work for some viewers, as the science-fiction material upgrades into veritable fairy tale, with obvious nods to Pinocchio and Yeats' "The Stolen Child," not to mention the unspoken but famous proverb that any technology, sufficiently advanced, is indistinguishable from magic, which is pretty much what sees David through.

The last time Spielberg danced this closely with Disneyana was the so-so HOOK. A.I. is on a higher plane, but one suspects that Stanley Kubrick, or even Hans Christian Andersen, would not have ended this drama the way that Spielberg does. Nice, anyway, to see a talking-animal sidekick (a computerized teddy bear) actually underplaying its role. More so than do Robin Wiliams, Chris Rock and Meryl Streep in barely recognizable vocal cameos.

I think when I first saw A.I. I was a little too critical about the overdose of sentiment and tear-jerker elements at the end. And I made a basic Human Error, as HAL-9000 would have put it, of [SPOILER ALERT] assuming that the deus-ex machina creatures who prove to be David's salvation after humankind goes extinct are CLOSE ENCOUNTERS-ripoff aliens (Spielberg's a repeat offender there; check out INDIANA JONES AND THE KINGDOM OF THE CRYSTAL SKULL, for example), rather than what these entities really are - the mecha of the far future, survived and self-evolved to a near-biological degree. And in the years since A.I. came out movies may have gotten more digitally sophisticated but intellectually ever more adolescent and comic-book-icized. This uneven robot drama only looks better in hindsight, gooey center and all, granting some unforgettable moments as the real transformers, the auteurist spirits of Spielberg and Kubrick, fight it out over the tone of the thought-provoking material. (3 out of 4 stars)
Posted by Charles Cassady Jr. at 12:01 AM