12 Hours of Terror (Saturday October 15th at the Capitol Theatre) 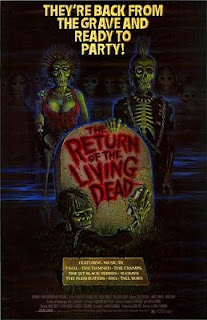 The word "marathon" references the battle of Marathon in the ancient world. Greeks won a fight with Persians not far from Athens, and a jubilant messenger ran 25 miles nonstop to the great city to announce the news - then dropped dead. In other words, marathons began in blood and death, a fact not proclaimed very loudly by Runners World magazine.

For the second year in a row the Capitol Theater, at the Gordon Square Arcade under the auspices of Cleveland Cinemas, puts morbidity back into marathons, via "12 Hours of Terror" commencing at 10 p.m. Saturday, October 15, and bleeding into Sunday morning at 10 a.m.

The movies lean towards raw, grindhouse stuff, R-rated and above, including Lucio Fulci's 1980 ZOMBIE, in which US audiences got their dose of foreign culture via a chiller from Italy about flesh-eating living dead on a Voodoo island. From that same year (and milieu) was HUMANOIDS FROM THE DEEP, a Roger Corman production about sea monsters with a habit of mating with surface women. Its Corman cable remake of about ten years ago is little remembered. But the MY BLOODY VALENTINE being exhibited is the 2009 high-tech Real 3D redo of the 1981 pickaxe-murder original, and THE FLY, probably the most mainstream of the bunch, is David Cronenberg's generally superior second filming of the 1958 sci-fi horror pic that wasn't too bad to begin with. Dan O'Bannon's RETURN OF THE LIVING DEAD, from 1985, was, depending on your POV (or a lawyer's) a remake, sequel, parody or all of the above to the George Romero zombie landmarks, and for a time, in the era before all this went to CGI, it really raised the bar for makeup goop and animatronic-skeleton gore. In the tradition of such marathons, there is also a mystery feature booked, and one may only hope that it does not clash awkwardly with the 42nd Street vibe set by 1982's 16mm cult classic BASKET CASE, about an creepy NYC guy who carries his mutant, malformed twin around in the most famous basket outside of Longaberger.

Nobody under 18 is admitted to the Capitol's night of schlock and shock, not only because of the grossout material but also because beer and wine will be sold, until 1:45 a.m.

Viewers can bring their own blankets and pillows, but otherwise standard moviegoing etiquette applies. No laptops, no cellphones, no laser pointers, no call-and-response a la THE ROCKY HOROR PICTURE SHOW. "It's not Mystery Science Theater 3000, said David Huffman, of Cleveland Cinemas. "It's not any audience-participation sort of night. The movies are there to be seen; we actually want people to be scared by the movies."

Moreover, outside food is not permitted. The concession stand will remain open dusk till dawn. And there is a Sunday continental breakfast, assuming one can keep it down.

Admission is $25 in advance, or $30 at the door. A special R.I.P. Package, purchased in advance only, includes a commemorative T-shirt and other perks.

The Capitol Theatre is located at W.65th Street and Detroit Avenue, in the Gordon Square. For more about 12 Hours of Terror go online to www.clevelandcinemas.com.
Posted by Charles Cassady Jr. at 3:40 AM