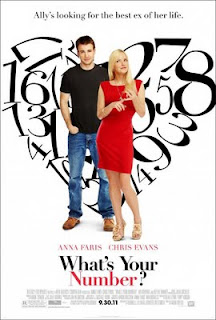 Criticizing a romantic comedy for being dumb and commercial is a little unfair. What is a Hollywood romantic comedy but a crass, easy-on-the-brain product designed to get women to drag their reluctant boyfriends and husbands into the mall-o-plex? So pity the director enlisted to make one. Like the contestants on a cooking show, he is given a set of ingredients and asked to make something palatable of them. With WHAT’S YOUR NUMBER?, the components include: co-stars Anna Faris and Chris Evans; story based on a “chick-lit” novel by a blogger-turned-author; giggling girlfriends planning a lavish wedding; copious drinking; edgy vulgarity and casual sex; an embarrassing bridal toast; a compulsive womanizer poised for reform; prominent product placement (Apple); and supporting appearances by fading luminaries (Blythe Danner and Ed Begley Jr.) as the parents.

These ingredients are de rigueur, but there’s a lot of wiggle room in the handling. WHAT’S YOUR NUMBER? is distinguished by many very funny lines, possibly attributable to co-screenwriter Jennifer Crittenden, the wunderkind writer/producer of The Simpsons, Everybody Loves Raymond and Seinfeld. (Crittenden was hired for The Simpsons at 23.) Not unlike Judd Apatow’s BRIDESMAIDS – whose opening scene it strangely mimics -- the movie is decidedly girl-centric, with lots of jokes centering on women’s attitudes about male inadequacy (complaints about “man boobs” and wry nicknames like “Finger-Smelling Fuck,” “Disgusting Donald,” Creepy Puppet Guy” and “Big Balls, Tiny Penis”).
Unfortunately, the demands of the silly plot defeat the best efforts of Crittenden, co-writer Gabrielle Allan (Scrubs) and director Mark Mylod. The movie, set in Boston, is based on the frothy book 20 Times a Lady, by Karyn Bosnak, who became famous for posting a blog soliciting donations to help her pay her $20,000 “shopaholic” debt (it worked). Ally Darling (Faris) is fired from her marketing job, and on the subway, reads a magazine article that says women have an average of 10.5 sex partners. To her horror, Ally tallies up the notches on her un-chastity belt and finds that they add up to a slutty 19, diminishing her chances of finding Mr. Right. She decides to stop sleeping around and, rather than look for a new job, revisit some old boyfriends in case one of them is “the one.” The retrograde message: if you can’t maintain a career, you might as well get married. Ally does have vague “creative” aspirations; she makes whimsical “urban” sculptures, despite having no apparent interest in the street or its denizens.
Amid the bustling preparations for her sister’s wedding, Ally enlists the help of her promiscuous and often-naked neighbor Colin (Chris Evans), a struggling musician, in tracking down her erstwhile flames. The “old boyfriends” journey is an area rich with comic possibilities, but these are barely explored. Ally stalks and “bumps into” a closeted gay African American politician who wants her to be his “beard,” and briefly dates a dashing millionaire, but most of the exes are only fleetingly glimpsed (a magician she declines to meet because he’s “still” tending bar), fleetingly encountered (a newly slimmed former fatty) or recalled in flashback (a dorky puppeteer who brought Muppets into bed). Some of the flashbacks are funny, though; I liked the one in which Ally and the politician campaign for George W. Bush(!), asking passersby, “Do you like freedom?”
Unfortunately, most of the movie’s energy is sucked up into the black hole of the wedding, even though Ally’s sister Daisy (Ari Graynor) isn’t an important character. Do filmmakers think women are so mad to see yet another lavish wedding that they don’t even care whose wedding it is?
Just as it’s un-sporting to slam a romantic comedy for dumbness, it’s no use complaining that it has a predictable ending; it’s the nature of the beast. It’s obvious that Ally, jobless though she is, will decide that love conquers all, and that a mostly unemployed musician who’s fun to hang out with is better than an uptight millionaire -- even if said musician does play in an '80s cover band. 2 3/4 out of 4 stars.
Posted by Pamela Zoslov at 12:05 AM