[WARSAW BRIDGE screens Monday October 3 rd at 7 pm at the Cleveland Cinematheque. Critic Jonathan Rosenbaum will be on hand to introduce and discuss the film.] 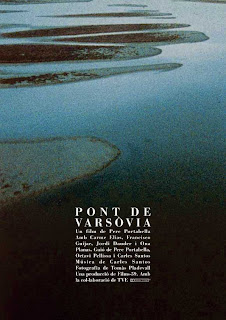 Distilling a film like this into words for a review is no easy task. There isn't really anything that could be called a plot in WARSAW BRIDGE, but that doesn't mean it isn't about anything. It's essentially a meditation on the arts – literature, sculpture, classical music, opera, photography, film, even cooking all get their due – and the ways in which they effect and are effected by outside forces. The one element that recurs through the film is a writer who has written an award winning book called Warsaw Bridge. He discusses his work with various people, telling a journalist that he cannot give a synopsis of it, and debating with a friend about the merits or lack thereof in modifying a work to reach an audience.

Watching this film, it's pretty clear which side of that argument director Pere Portabella comes down on, as this is definitely not the sort of film aimed at mainstream audiences. His film is a series of vignettes that string together some absolutely stunning images. There's an orchestra playing in windows along a street, an opera performed on forklifts in a fish packing plant, and a group of semi nude women singing in a bathhouse, to name just some of the arresting visuals on display here. A playful sense of surrealism runs through it all, avoiding pretension by keeping the tone light.
To some people, a movie without a story is not a movie at all. Those people probably shouldn't watch WARSAW BRIDGE. But if you're the kind of person willing to simply let images and sound wash over you, communicating their themes without a narrative structure, there's much to like and to think about here. 3 1/2 out of 4 stars.
Posted by Bob Ignizio at 12:01 AM