Viva Riva! (September 9th and 10th at the Cleveland Cinematheque) 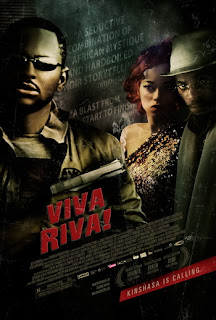 The plot of the Congolese action film VIVA RIVA! could have been lifted from a seventies exploitation flick: Riva (Patsha Bay) is a happy go lucky criminal and con man returning to his home town with a truckload of stolen gas. He takes the advice of his fence to sit on the product a few days and let the price go up, biding his time by hitting the nightclubs looking for women and leading his married friend J.M (Alex Herabo) astray in the process. Meanwhile the Angolan gangsters Riva stole the gas from, led by Cesar (Hoji Fortuna), turn up looking for him with the assistance of a lesbian military officer (Marlene Longange). Riva also gets on the bad side of local gangster Azor (Diplome Amekindra) by trying to steal his girlfriend Nora (Manie Malone).
It's not a matter of if there's going to be violence, but when and how much. The answer is soon, and in considerable quantity.
The character of Riva is very much a classic anti-hero, and Patsha plays him with charisma and cockiness. You can almost root for him despite his lack of morals. Besides, compared to the rest of the characters he's practically a choir boy. While everyone else around him is motivated purely by money and power, and use violence as a first rather than last resort, Riva just wants to have a good time. He may even truly be in love with Nora. Of course one senses that, as with fellow anti-heroes James Bond and Shaft, long-term fidelity with any woman is highly unlikely.
Writer/director Djo Munga uses his pulpy story to explore some serious themes about the current state of The Democratic Repubic of the Congo, at least as he sees it. His characters each represent a different element of the country's power structure, and the corruption that runs through all of them. Riva's friend J.M., representing the common man, starts out looking like a decent person but soon finds himself changed by the corruption around him. The only hope for anything resembling a better future is the younger generation, represented by a street kid who helps Riva. But it's a slim hope, at best.
VIVA RIVA! works just fine as a straight forward action picture, though, so no need to think too deeply if you're not so inclined. Aside from the excellent cast and Munga's taut direction, the film is also beautifully shot by Antoine Roach. The plot is probably just a bit too conventional for VIVA RIVA! to achieve greatness, but for fans of edgy action films it should be more than adequate. 3 out of 4 stars.
Posted by Bob Ignizio at 12:01 AM