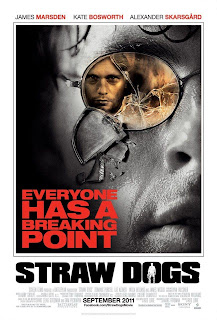 One of the most divisive films of the early ‘70s, Sam Peckinpah’s STRAW DOGS drew battle lines between two sets of film critics: those who saw the tale of a nebbish creampuff driven to violent extremes in the name of his family and home as a compelling exploration of man’s innate violence and the mutability of society’s civilized ideal, and those who thought it was a gratuitously misogynistic rape-fest ending in a tiresomely over-indulgent celebration of vengeful brutality (and a lousy Peckinpah film to boot). I mention this critics divide because director Rod Lurie (THE CONTENDER) started his film career as a critic. Though he was too young in ’71 to throw his hat into the original debate, his 2011 STRAW DOGS remake, which he both directed and wrote, is nothing if not utterly intent on convincing the viewer that Peckinpah’s original vision was pure brilliance… the themes, he seems to insist, just needed a bit more emphasis.

The result? whereas Peckinpah hit the audience over the head with a sledgehammer (movie-wise… in person, he used guns), Lurie hits us with a giant Acme-brand anvil.

So, Hollywood screenwriter David Summer (James Marsden) and is actress wife Amy (Kate Bosworth) move back to Amy’s childhood home of Blackwater, Mississippi, where her ex-footballing high school ex Charlie (Alexander Skarsgard), along with a posse of beer-groping Bubbas, is still fightin’ and feudin’ up a blue-collared streak. From this point forward, the film plays out the most ludicrously over-the-top game of city mouse / country mouse ever committed to celluloid. Seriously, from the moment that David dares to order a Bud Lite, it plays out like a bad 80s stand-up routine: “City slickers hold guns like this..” [fumbles hands] “… good ol’ boys hold guns laik this.” [chk-chk pshhhh]

I will say that Marsden, for obvious reasons, makes a great coiffed, oblivious, pseudo-academic L.A. transplant. Bosworth, on the other hand, plays the whole carefree, down-to-earth actress thing a bit overly vapid, and needlessly sour. Skarsgard is unremarkable, but requisitely physically imposing compared to Marsden.

Regardless, the city/country stuff is just, like, on the surface. Remember: STRAW DOGS is a compelling exploration of… all that stuff I said in the beginning. See, the screenplay David’s writing? It’s about the Battle of Stalingrad. (eh? battles... homeland invasions... get it?) But while he’s thinking his big college-boy thoughts about the academic trivialities of war , Charlie and his friends are sweating and roofing and turning their macho eyes on his braless jogging bride, who they feel is more a part of their down-home backwater than of David’s cushy world of fancy cars and laceless shoes. It’s after this push-pull relationship starts moving toward the inevitable camel-crippling straw (a physical attack that’s handled marginally less exploitatively than Peckinpah’s version) and third-act conflagration, that Lurie’s thematic emphases start going bonkers

There's some hunting stuff that starts out okay: The film begins with an ominous scene of Charlie and his friends killing (or, given the animal’s bizarre animatronic appearance, perhaps I should say blade running) a deer, execution style. Later, in building up to the first real explosion of violence, we get a sequence of Charlie and his friends loading their guns and heading into the woods intercut with footage of Amy jogging down a wooded road like a carefree doe. Sure, it’s blatant, but it’s cleanly executed and concisely thematic: Charlie’s proud dominance over weaker creatures, David's inability to protect Amy, etc.

But then Lurie continues using this device, daisy-chaining increasingly convoluted intercut sequences: a sexual assault paired with scenes of a hunter toting his gun like a phallus; the same assault intercut with a football game; the football game intercut with another assault and a fire and a church sermon. Lurie is so desperate to unmask all the violence that we integrate into the every day – from old testament recitations in church to high school sports to watching (or writing) WWII movies – that the film, which may have started out cartoonish as a means by which to create characters as out-sized as the universal themes its exploring, ultimately loses its focus and, rather than exploring anything deeply, manages only a succession of obvious and overwrought images that would probably only be totally coherent as buzzed in Family Feud answers to the prompt “Violent Things People Like.”

Lurie’s desperation to draw deep significance from what may be an empty, or even worse, as some feminist critics insist, poisoned, well is no more evident than when he has David refer to Charlie’s posse as “straw dogs”… and then go on to explain, more to the audience than his wife, what real-life straw dogs he’s referring to and in what way Charlie’s gang are metaphorically similar. (Admittedly, it is apropos – having the words of a pompous screenwriter spoken by a character who’s a pompous screenwriter… but c’mon.)

Lurie’s failure to invoke such meaning was demonstrated by the audience’s reaction to his filmic reverie’s violent conclusion: whoops and hollers of downright exploitation-lovin’ glee. (1.5 out of 4 stars)
Posted by Matt Finley at 12:01 AM