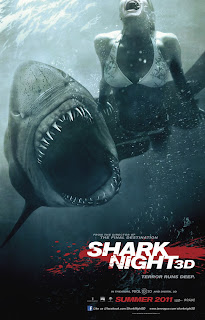 SHARK NIGHT 3D gives you sharks, and not just your expected great whites, but a wide range and variety of the predatory sea creatures. Significant portions of the film take place at night. The movie is in 3D. You certainly cannont accuse this movie of false advertising. You can't accuse it of being good, either, but then who goes to see a movie called SHARK NIGHT 3D expecting quality cinema? This is low budget trash aimed at the teenage audience, and as such it's more or less successful.

The movie sets the dinner table for its toothy terrors by having college football star Malik (Sinqua Walls) invite his tutor, med student Nick (Dustin Milligan) to come hang with the cool kids at the summer house of the cute but distant Sara (Sara Paxton). The group of attractive young partiers is rounded out by Malik's long time girlfriend Maya (Alyssa Diaz), bad girl Beth (Katharine McPhee), art class model Blake (Chris Zylka), and Nick's comic relief buddy Gordon (Joel David Moore). Other interested parties are Sara's ex-boyfriend Dennis (Chris Carmack), his straight from central casting redneck buddy Red (Joshua Leonard), and the local sherriff (Donal Logue). We already know from the opening scene that there's a shark loose in the salt water lake Sara's beach house sits on. It's just a matter of sitting through the requisite partying scenes waiting to see who gets chomped on first.
This movie is PG-13, so it's not a full-tilt feast of gore and nudity like PIRANHA 3D, which frankly isn't such a bad thing in my book. Still, the movie is not completely devoid of spice. Zylka shows his butt, and McPhee and Diaz take off their tops while turning just enough to the side as to avoid slipping into R territory. Everyone is in skimpy swimsuits throughout. As for the shark attacks, there's a fair amount of blood in the water, and one character gets his arm bitten off. It may not impress hardened gore hounds, but it's enough to elicit a few screams and “ewws” from its target audience. And hey, don't kids deserve a scary movie they can go see without sneaking into the theater?
If you're the kind of person who would consider going to see a movie called SHARK NIGHT 3D in the first place, chances are you won't be dissappointed. It's a ridiculous movie that plays it straight without taking itself too seriously, and I respect it for that. The cast is decent, the movie delivers what it promises, and I had fun with it. As usual, the 3D was a waste of money, and even the one shot of a jumping shark that should have been the money shot doesn't jump off the screen the way it should. But go see a 2D matinee, and you should feel as if you got your money's worth. 2 1/2 out of 4 stars.
Posted by Bob Ignizio at 2:40 PM