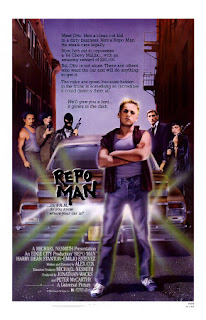 When the 2010 futuristic thriller REPO MEN came out, with Jude Law among medical mercenaries who repossess transplanted organs when the new owners fail to pay them off, I liked the premise (bet the Cleveland Clinic will go that route, in the end) but hated the title. It would only eclipse the 1984 cult classic REPO MAN, the debut from emigre British director Alex Cox, beloved of a generation of moviegoers as the ultimate in "punk" cinema, yet with the novelty of not taking place in a rock-club background, like you'd expect. Fortunately, I do believe REPO MEN sank like a stone, while REPO MAN is still there to be appreciated in all its nihilistic glory, quotable dialogue and restless energy. Not so much screwball comedy as screw-it-all comedy.


Emilio Estevez, before he kind of blew his R-cred by doing Mighty Ducks movies for Disney (actors, feh! Can never rely on them) portrays Otto, an alienated LA youth working a series of dead-end jobs. He loses a chance of sex at a punk-rock party when an ex-convict pal steals his whorish girlfriend, and he learns that his smiling idiot parents gave away all his college-fund money to a sleazy TV evangelist. Otto's life changes when he's tricked by a middle-aged stranger named Buddy (Harry Dean Stanton) into helping repossess a car whose owner fell behind in payments.

Buddy works for a small agency with other such repo men, a colorful collection of lowlifes and a kick-ass hot secretary, and Buddy aspires to mentor Otto in the "repo code" For a while Otto enjoys the "intense" and semi-outlaw lifestyle and settling scores on some old enemies. But ultimately he views Buddy as the broken-down drunk that he is and the repo gig just another grind. But a distraction/salvation comes in the form of an especially sought-after car, a classic Chevy Malibu (funny, the first time I saw this flick I could've sworn it was a Ford Galaxy 500, but I'm probably thinking of ALPHAVILLE) with a $20,000 reward bounty, that also draws the greedy attention of rival repo teams, government agents, revolutionaries and punks. The secret reason is that the auto, driven by a dying, crazed-mad scientist, may be carrying deadly alien corpses, leftovers from a Roswell-style UFO crash and stolen from their deep-freeze at an Air Force base.

Aliens? Radioactivity? What? It's never fully spelled out, which was a fatal idea for The X Files but which works in this satirical milieu just great. Whatever the entities are, they make the trunk and gradually the entire car glow like an apparition and zap people they don't like. While he careens through a modern-day Los Angeles that's all bad neighborhoods, fascist police, ugly parking lots and concrete roads traveled by disgruntled creeps, Otto and the auto (and a surprise member of the repo gang) have a rendezvous with destiny.

The narrative feels casually thrown together, yet is actually amusingly well constructed, and the modest, pre-digital special effects are quite satisfactory, even a chintzy finale that pokes fun at the lordly climax of CLOSE ENCOUNTERS OF THE THIRD KIND. The impish sci-fi angle is kooky enough that it helps make a sour theme go down, that everything sucks in general, and if deadly extraterrestrial forces offer you a chance to get in their vehicle and take off from rotten Earth, go for it. Gotta be better than this. A message that holds up just as well in the Obama era as it did during the Reagan days, though the nostalgia value occurs in seeing the band The Circle Jerks (dissed by Otto with "I can't believe I used to like these guys") and ska greats The Untouchables. Oh, and executive producer was Mike Nesmith, late of, yes The Monkees, but also a musician of note who pioneered the twinning of music and image in the music-video, before that sort of thing became corporate and MTV-tiresome.

Filmmaker Cox later wrote an obscure graphic novel entitled "Waldo's Hawaiian Holiday" that he teased the fandom with, alleging it was a REPO MAN continuation, with Otto losing his memory and now calling himself Waldo. In 2010 home-video saw the debut of another un film de Alex Cox, REPO CHICK, a sort of revisit to the vibe, with some of the supporting REPO MAN cast- but not Estevez or Stanton - returning (in different roles) and with the update of Paris Hilton-style heiresses, California bank foreclosures and economic desolation. And the oddball gimmick of being a "virtual" film, all the live actors chroma-keyed into artificial, miniature and CGI sets. Many more folks saw REPO MEN than caught REPO CHICK, sorry. I hope that “Repo Kids” remains something I just thought up right here and now; nobody tell Cox about it. That's an order. (3 1/2 out of 4 stars)
Posted by Charles Cassady Jr. at 12:01 AM