Rejoice and Shout (September 17th and 18th at the Cleveland Cinematheque) 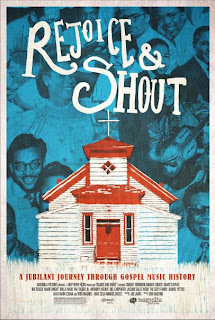 Rhythm and blues icon Smokey Robinson doesn’t mince words when discussing spirituality in REJOICE AND SHOUT, the brilliant new documentary on Gospel music by Danish filmmaker Don McGlynn.  The “Tracks of My Tears” crooner admits he didn’t like attending Sunday services as a boy.  He didn’t understand the impact of the Holy Spirit back then, and it frightened the future  Miracles singer watching other churchgoers get “slain by the spirit” until they convulsed or passed out.

Robinson’s discussion of faith lays the groundwork for an exhausting retrospective of Gospel music in America that assembles interviews with the people who made it happen (Ira Tucker, Mavis Staples), pastors who carry the torch today (Andre Crouch, Darrel Petties, Kirk Franklin), and the academician-fans who help spread the word in print (Bill Carpenter, Anthony Heilbut) and on radio (Jacquie Gales-Webb).  REJOICE also features dozens of captivating performance clips compiled by producer Joe Lauro from vintage reels and television programs like Tv Gospel Time.  Believer or no, the dynamic power of faith-based music becomes irrefutable when seen in action (even if only in black and white).
It takes patience journeying back 200 years with the director to study the impact of slave song and plantation music on African-American culture--but it's worth the trip.  Within minutes it becomes clear McGlynn’s film isn’t about Gospel exclusively; it also details the enormous influence of worship music on offshoot styles that came later.  In other words, REJOICE chronicles the roots of the roots of Rock and Roll.
Claude Jeter’s soaring falsetto distinguished The Swan Silvertones years before Barry Gibb and his Bee Gees brothers ruled the charts.  Sister Rosetta Tharpe was picking her Gibson SG guitar decades before AC-DC mixed four-chord rock with mischievous, masculine swagger.  The Soul Stirrers and Staple Singers were guitar-driven vocal groups bringing people to their feet in an era before Chuck Berry, Buddy Holly, and Elvis Presley effectively co-opted the sound for mainstream audiences.  The Dixie Hummingbirds perfected their intricate multilayered harmonies long before The Beach Boys expounded upon the barber shop style.  Schooled on the blues of Bessie Smith, former hairdresser Mahalia Jackson became the female voice of a generation.  Elsewhere, smooth-singing “jubilee” combos began shouting and scatting as part of their acts.  For a time, The Five Blind Boys of Mississippi and The Blind Boys of Alabama engaged in a friendly musical rivalry not unlike that of Howlin’ Wolf and Muddy Waters (or Lennon / McCartney vs. Jagger / Richards).
The film traces the music through the Great Depression and Civil Rights movement into the soulful 60s and 70s, focusing on its power to unite and heal people.  Smokey recognizes that the young guys rappin’ to the Lord today are simply taking Gospel to the next level.  But Robinson warns hip hop artists not to get hung up on the bling of superstardom.  “You can’t take it with you,” says Smokey.  “You have to make yourself holy inside.” McGlynn never loses that focus, earning an “A” in Musicology. 3 out of 4 stars.
Posted by Peter M. Roche at 12:01 AM