The Names of Love

[THE NAMES OF LOVE opens in Cleveland on Friday September 16th exclusively at the Capitol Theatre.] 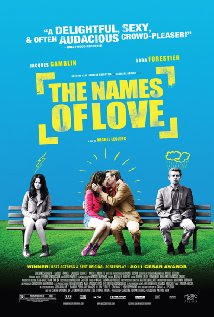 Maybe it's society's fault, or maybe it's just my extremely limited intellectual repertoire, but these days when I watch a new French comedy feature le mind de Charles Cassady pretty much splits it two ways: Is this French movie one of those that's going to get a lame PG-13 remake from Hollywood in a matter of months, or is it not? If it's too "French" and won't translate to an LA/NY locale, then out go my wisecracks about possible casting decisions. Jennifer Anniston in the Catherine Deneuve role, Tim Allen in the Gerard Depardieu lead. It'll be crap-tastique, mes amis! And that's, like, half the review right there.


The love/sex farce THE NAMES OF LOVE, however, probably won't get the remake-o-matic treatment like DINNER FOR SCHMUCKS and so many forgettable others. Still, one can see that in the eyes of the average French moviegoer, this is the equivalent of un film de Drew Barrymore, a crowd-pleaser for the Paris Match crowd. It entertains in the same fashion and has a lot of braininess about it, a bit of smarminess, and a blessed absence of film-festival existential angst.

Commencing with the old Woody Allen gambit of estranged lovers talking directly to the camera (Woody Allen actually gets name-checked in the script), it details the contentious relationship of two sides in an odd-coupled couple, against a backdrop of contemporary French politics and prejudices. Arthur Martin (Jacques Gamblin) is an overcautious epidemiologist whose Holocaust-survivor mother and father have tried to assimilate utterly into mainstream-homogenous society, to the point of erasing from history a couple of Greek grandparents who got deported. Baya Benmahmoud (Sara Forestier), a half-Algerian daughter of hippie parents (the Algerian conflict was France's cultural equivalent of Vietnam) is a brazen left-wing activist and multicultural freaky chick who uses her sexuality as a political weapon, serially marrying ill-favored immigrants in order to get them citizenship. On the side she frequently and habitually seduces any male she considers "fascist" (even Islamic fundamentalists) in a literalization of the flower-power cliché about making love, not war.

Baya considers Arthur a fascist at first sight, which predetermines an affair, but she's also transfixed by his Jewish heritage; matched to her Algerian one, she figures that together they sum up most of the persecuted/ oppressed people everywhere. Will their relationship survive his neurotic timidity and her being a loose-cannon free-spirit whackazoid? One whose attention span is such that, whilst parsing the different candidates for racial correctness, she accidentally votes for right-wingers in elections?

THE NAMES OF LOVE (the original French title translates as the far less saleable "The Names of People," which sounds less like a Lady Gaga tune, sorry) constitutes a gourmet feast for Francophiles - the kind who follow the real news from Gaul, not just the breaking item about how Audrey Taitou, Marion Cotillard or Vanessa Paradis are being flown across the Atlantic in chains to do some Hollywood blockbuster - and there are jokes about Giscard d'Estaing, Charles DeGaulle and Nicholas Sarkozy, as well as a walk-on acting role by politician Lionel Jospin portraying himself (quite charmingly). Even for those who don't know this part of the world that well there are still plenty of rom-com moments that translate, like the painful MEET THE PARENTS stuff and a most amusing salute to such ill-fated entertainment technology as the Sony BetaMax and the LP-sized laserdisc. And all the female nudity makes a sort of universal language all by itself.

I guess the Baya character might be the sort of stereotype who, beneath the winks and the jokes and the ooh-lah-lahs, does French womanhood no real favors. Adolescent sexual molestation by a teacher is given as a facile psychobabble explanation for why Baya acts like a whore and wears skimpy and/or partially absent clothing, in one sequence simply forgetting to dress and going out full-frontal naked in public. I'd like to say I hadn't seen anything like that before - but I've had to watch a lot of Japanese anime lately and there that kind of stuff happens all the time, especially with busty bimbo nurses. One can't say actress Forestier didn't give her all in this part.
It may or may not change that outlook if one knows that the script, apparently some kind of contest prizewinner, from co-writers Baya Kasmi and director Michel LeClerc, claims to be autobiographical, deriving upon their own real-life intimate relationship, sort of, kind of, to a point. Okay, whatever. Filmmakers will say that SANTA CLAUS CONQUERS THE MARTIANS is based on fact, if that helps sell an extra ticket. Which is as true for commercial cinema in France as it is for fascist Hollywood. Still, the inference is that dude's sex-mad girlfriend lets her clothes fall off in public regularly. Monsieur Michel LeClerc, stand in line over there, s'il vous plait, with people I hate, while I try to figure out what I'm going to do with you all.
So take NAMES OF LOVE as French commercialism at its kitschy best, and hope that a heavily rewritten remake starring Adam Sandler and a Kardashian sister is just my sick American imagination. (3 out of 4 stars)
Posted by Charles Cassady Jr. at 12:01 AM