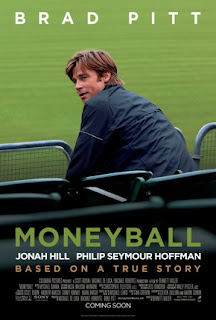 Looking for a way to get your high school athlete excited about trigonometry?
Quadratic equations are co-stars in MONEYBALL, Bennett Miller's new based-on-a-true-story film about a budget-constrained general manager who uses pimped-out statistics to assemble a miracle baseball team.  Oakland A’s GM Billy Beane (Brad Pitt) injects America's favorite pasttime with super-science—only to learn you can't take the romance out of game.

Hopelessly outgunned and penny-pinched, Beane is tasked with rebuilding a competitive team after his Athletics are embarrassed in the 2001 ALDS.  An ex-baller, Beane recognizes that deep-pocket clubs like the Yankees can simply buy the talent needed to ensure victories, while low-budget franchises (like his) scramble for the leftovers.  The predicament worsens after A’s top brass trades three marquee players (including first baseman Jason Giambi).  Beane wheels and deals opposing execs with the passion of a boy collecting TOPPs baseball cards—but there’s just no funding to seduce hot prospects like Ricardo Rincon.
His luck changes after a dismal meeting with Cleveland Indians GM Mark Shapiro.  It’s here Beane makes the acquaintance of Peter Brand (Jonah Hill), a hotshot twenty-something scout with a degree in economics from Yale.  Pete explains that while Billy can’t afford to replace stars like Giambi man-for-man, he can compensate for their absences in the aggregate with overlooked, undervalued, bargain bin players who—despite their many shortcomings—routinely get on base.  Inspired, Beane taps a pitcher with a bum arm (Scott Hatteberg) to be the A’s new first baseman and a cock-armed righty (Chad Bradford) to step in for Jason Isringhausen on the mound.
Beane meets resistance on all sides.  The A's veteran scouts are suspicious of “Google Boy” Brand's unorthodox approach and resent the newcomer's sway over Billy.  Grumpy manager Art Howe (Philip Seymour-Hoffman) rejects the “fortune cookie wisdom,” instead working his A’s lineup based on instinct.  The club becomes the laughing stock of 2002—until Beane tricks Howe into utilizing the new guys at their designated positions.  Still, Billy lacks confidence.  His own career with the Mets didn’t pan out a decade ago; now he can’t even watch a game in person.
Pitt is terrific as Beane, although there’s precious little emotional middle ground available for his tormented executive to cover.  Billy’s either “up,” angry, full of bluster—or he’s “down,” withdrawn and mute.  Only during visitations with his estranged daughter does Beane forget the magic numbers and make a meaningful human connection.  Hoffman is convincing as crusty Howe, and Stephen Bishop makes for an arrogant but over-the-hill outfielder (David Justice).  Guitar sensation Joe Satriani has a patriotic cameo.
The math of MONEYBALL is fascinating.  Based on the “sabermetrics” developed by factory security guard Bill James, the philosophy combines probability formula and algorithms with Wall Street’s cool logic.  The movie blends actual game footage and recreations, with Miller peppering the story with empirical data on computer screens.  But the director wisely hinges his narrative on people instead of software programs, allowing viewers to sympathize with Beane and the players despite their exorbitant salaries.  The movie is also very funny.  Think BULL DURHAM meets A BEAUTIFUL MIND, and you’ve got a winner.  3 out of 4 stars.
Posted by Peter M. Roche at 12:01 AM