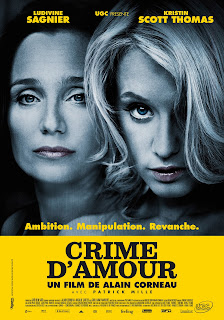 I don't know for sure what goes on in all those tall office skyscrapers in downtown Cleveland. Not all of them are deserted. I have seen well-attired people go in and out who actually do hold some sort of elite positions. I imagine it's either dirty schemers plotting nonstop downsizings and layoffs, or HR drones feeding my many submitted resumes into the paper shredder. Of course, I exaggerate wildly... No business here wastes valuable shredder-wear-and-tear on your resume. They just toss them out the window. Smiley-face emoticon! :)

The French thriller LOVE CRIME (an all-too-accurate translation of the French title Crime D'Amour) provides a frisson for both the white collars and those of us never likely to make more than $9 an hour, no benefits. Co-writer and director Alain Corneau's boardroom noir is an austere bit of nastiness based around a Parisian multinational (that's got something to do with big-agra in the Third World; it's never spelled out in detail and it probably isn't good). Christine (Kristin Scott Thomas) is a high-powered executrix who has a rising but demure protégé in young Isabelle (Ludivine Sagnier). They share a cozy, almost aunt-and-niece relationship, one that extends even to bedding the same lover, Philippe (Patrick Mille), a lawyer who works on accounting for the firm.

But Christine blithely takes credit for Isabelle's ideas and hard work to secure herself a sweet promotion to New York City, among other perks. That's just how the game is played, she tells Isabelle. When Isabelle pulls a similar minor stunt to draw credit to herself, Christine lashes back with malice and spite, first humiliating Christine at a special office party, then putting the girl on notice with an alleged threatening e-mail to her sent from Isabelle's computer (oh, for those keeping score, Sony Vaios get the product-placement spotlight here. Don't worry, Apple Macintoshes will get their usual cameos in the no doubt English-language Hollywood remake of this that some executive slug is market-researching right now).

Isabelle hears from a co-worker that a former underling of Christine's, similarly mistreated, had to leave the company after a nervous breakdown. The stricken girl then does begin plotting a deadly revenge against Christine - all the while behaving in the worst fashion possible and leaving incriminating clues, deliberately, that will point straight to Isabelle's guilt. What gives? Clearly a "perfect crime" scenario, which Corneau's mise-en-scene leads us through in SAW/USUAL SUSPECTS fashion, withholding key stuff until the big flashback "reveals" near the end disclosing the full, sinister layout of Isabelle's strategy.

Actually, if you want to go back some decades, Henri-George Clouzot's classic horror-suspenser LES DIABOLIQUES (remade a couple of times by Tinseltown, and I don't doubt we'll all be unlucky enough to live to see more) makes a good analog to LOVE CRIME, only now we see the tricky events from the POV of the perpetrator rather than the victim. This isn't quite as neat as LES DIABOLIQUES, and the peripheral character of shifty Philippe may have more to do with the scheming than what we see; that we're left in dark about his full innocence was really the only thing I couldn't predict in advance - well, that an a semi-twist ending, not the most breathtaking out there, but one which closes the curtain with an appropriately Machiavellian undertone.

The picture may indeed make us all grateful after all that most of us work not in prized corner suites but in fast-food and discount-retail wage-slave jobs that nobody's going to stab us with a butcher knife over. At least not quite yet. (3 out of 4 stars)
Posted by Charles Cassady Jr. at 12:01 AM