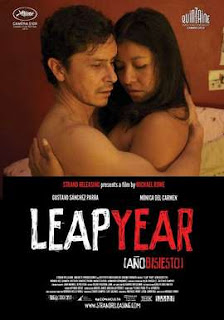 Kinky sex has never seemed more depressing than it does in LEAP YEAR (Año bisiesto), the Mexican film that won the Golden Camera award for best first film at last year's Cannes film festival. Director/co-writer Michael Rowe has set every scene (except for a few voyeuristic looks out the window) in one location; the apartment belonging to his protagonist Laura (Monica del Carmen). The film is also very nearly a one woman show, with Ms. del Carmen giving a believably harrowing performance as a lonely freelance journalist still dealing with issues surrounding the death of her father four years ago on a leap year.

Laura's way of dealing with her emotional pain is to engage in casual, anonymous sex. That is until she brings home Arturo (Gustavo Sánchez Parra). Arturo likes it rough, and Laura soon discovers she does as well. The two continue to see each other, with the intensity of their encounters escalating each time. It may not be everyone's cup of tea, but it's consensual and no one is really getting hurt. That threatens to change, however, when Laura asks her lover to do something that goes beyond traditional S & M play.
I suspect Laura's issues with her father run deeper than merely his death, but that's never elaborated on. In fact much of about the film remains vague and unclear, and finished watching having no idea what Rowe was trying to say here. I don't have a problem sitting through difficult, downbeat films, but I do ask that there be a point to it all, and if LEAP YEAR has one, then I missed it. As an exercise in minimalist filmmaking it's kind of interesting, but in the end this one just left me confused and depressed. 2 out of 4 stars.
Posted by Bob Ignizio at 12:01 AM