[THE LAST MOUNTAIN opens in Cleveland on Friday September 9th exclusively at the Cedar Lee Theatre.] 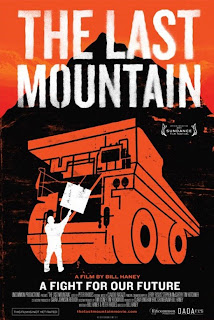 In his book about the hard life of coal miners in the industrial north of England, The Road to Wigan Pier, George Orwell wrote, “Our civilization…is founded on coal…the machines that keep us alive, and the machines that make the machines, are all directly or indirectly dependent upon coal. In the metabolism of the Western world, the coal-miner is second in importance only to the man who ploughs the soil.”


This idea is echoed in Bill Haney’s passionate documentary, THE LAST MOUNTAIN, about the fight to protect the mountains and towns of Appalachia from the depredations of the coal industry. “I don’t think people understand where electricity comes from,” says one person involved in the struggle. “They think it’s an entitlement.” Few people see the dirty, dangerous and destructive processes of coal mining, except when a major mining disaster places it in the media spotlight, but just about everything in modern life – including writing this article and watching a documentary film, depends on the electric power it produces. The movie notes that almost half of the electricity produced in the U.S. comes from the burning of coal, and 36% of that coal comes from the mountains of Appalachia.

The film chronicles the battle over Coal River Mountain, in the Coal River Valley of West Virginia, where residents and environmental activists are struggling to stop Big Coal corporations – in particular the notorious Massey Energy and its now-retired CEO, Don Blankenship – from continuing the practice of mountaintop removal mining, which involves dynamiting the mountain’s top off to mine the coal within. Mountaintop removal mining, aside from the damage it inflicts on the landscape and those who love it, poisons the air and water with lead, arsenic and selenium, promotes cancer deaths and spreads pollution to other states. “You feel like you’re under attack, two or three times a day” one resident says of the massive explosions.


Mountaintop removal, according to the film, has destroyed 500 Appalachian mountains, decimated a million acres of forest and buried 2,000 miles of streams. Massey, which does more mountaintop removal mining than any other U.S. company, committed more than 60,000 environmental violations, according to the EPA. Coal baron Blankenship, shown in the film heading a red-white-and-blue anti-union rally, makes a perfect villain for the film, which chronicles his long history of union-busting and brazen defiance of environmental and safety regulations. Blankenship memorably came before Congress after the massive 2009 explosion at Massey’s Upper Big Branch mine in Kentucky killed 29 miners.


THE LAST MOUNTAIN vividly illustrates the human toll of coal production. Maria Gunnoe, a native of a valley in Boone County, West Virginia, who comes from a family of coal miners, became an environmental activist after her property was nearly drowned after mining blasts removing a ridge above her ancestral home. Jennifer Hall-Massey, of Prenter, West Virginia, recounts the wrenching loss of her 29-year-old brother and five close neighbors to brain tumors. Their deaths have been linked to well water contaminated with lead, manganese and barium from coal sludge injected by coal companies. Chuck Nelson, a longtime coal miner, was spurred to take on West Virginia governor Joe Manchin – a valued “friend of coal”– when he learned his granddaughter and her schoolmates were falling ill after breathing coal dust from a nearby silo through their grade school’s ventilation system. “Gramps,” his granddaughter told him, “these coal mines are making us kids sick.”


The movement to stop mountaintop removal mining has a powerful advocate, Robert F. Kennedy Jr., the attorney and environmental activist whose lifelong commitment to protecting the planet is rooted in a childhood love of nature and a legacy inherited from his father, who fought strip mining. As a boy, RFK Jr. lobbied his uncle, President John Kennedy, for stronger environmental laws. In the film, Kennedy speaks passionately and eloquently about the basis of environmental law in the Roman Justinian Code, which defined environmental rights – to the air, the flowing water and the sea – as basic human rights. “It was God who made these mountains, and Don Blankenship who is taking them down.”


Although the film is not about Kennedy, as a side note it’s interesting to think about America’s most famous family and its members’ multi-generational commitment to public service. “I never thought I’d have a Kennedy in my house,” marvels an elderly West Virginian, one of the last holdouts in a town nearly decimated by coal mining. Miners and pro-mining counter-protesters are less awed by Kennedy’s presence, shouting at the carpetbagger to go home.


As Kennedy engages in a coffee-shop debate with Bill Raney, president of the West Virginia Coal Association, the two men appear to occupy different universes. Kennedy speaks in broad, philosophical terms about protecting the planet, while Raney takes a practical line, arguing that the industry does everything it can to protect the environment while also safeguarding jobs and “making electricity for you.” Blankenship and his cronies demonize protesters as “environmental extremists,” and indeed mountaintop removal has inspired some extreme acts of non-violent protest. Grandmothers and grandfathers allow themselves to be hauled off to jail; one group of activists staged a tree-sit that for nine days halted blasting on Coal River.


As with all evils in today’s political landscape, the root of it is money. The powerful coal industry lobby has helped put many a coal-friendly politician in office, most notably George W. Bush, whose environmental policies – including gutting key sections of the Clean Air Act and Clean Water Act, reducing EPA enforcement and approving mountaintop removal -- were a gifts to the coal and oil industries. (For his part, Barack Obama has touted the promise of “clean coal,” an aspirational industry slogan that one environmental attorney has likened to “a healthy cigarette”). Kennedy describes the issue with ringing rhetoric: “We are living in a science-fiction nightmare where children are gasping for breath on bad-air days because somebody gave money to a politician. And my children, and the kids of millions of other Americans, can no longer go fishing and eat their catch, because somebody gave money to a politician.” The Appalachian mountains, Kennedy says, “the birthplace of American democracy, the landscapes where Davy Crockett and Daniel Boone roamed, the source of our values, our virtues, our character as a people – are being cut to the ground so somebody can make money.”


What does the movie propose as an alternative to ruinous, toxic coal, a commodity on which so much of modern life depends? The final segment is devoted to the promise of wind farming, and it makes a strong case for the economic viability of this clean, renewable energy source.


The words Orwell wrote in 1937 still apply to the dirty business of coal mining, whether mined underground or blasted from mountaintops. “On the whole we are never aware of it. We all know that 'we must have coal,' but we seldom or never remember what coal-getting involves. Here am I sitting writing in front of my comfortable coal fire. It is April but I still need a fire. Once a fortnight the coal cart drives up to the door and men in leather jerkins carry the coal indoors in stout sacks smelling of tar and shoot it clanking into the coal-hole under the stairs. It is only very rarely, when I make a definite mental-effort, that I connect this coal with that far-off labour in the mines. It is just 'coal' — something that I have got to have; black stuff that arrives mysteriously from nowhere in particular, like manna except that you have to pay for it.”


And so it still is today. As this documentary demonstrates, people living in the embattled Appalachians pay dearly, sometimes with their lives, for coal. 3 out of 4 stars.