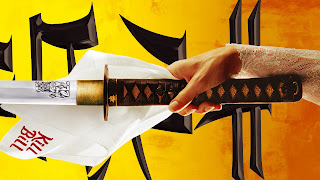 Hard to recall now, but there was a time when Quentin Tarantino seemed like a two-hit wonder. After the cult-immortal RESERVOIR DOGS and the popular smash PULP FICTION the fellow had a high-profile yet paradoxically rather muted decade. His underrated, mature crime drama/character study JACKIE BROWN didn't quite thrill his fanbase, and he made mostly cameos in his friends' movies (FOUR ROOMS, anybody? Didn’t think so…), spearheaded re-appreciations of overlooked genre stuff and imports like SWITCHBLADE SISTERS, FIST OF LEGEND and DETROIT 9000, and looked alarmingly as though his most actively productive era was behind him.

But with his long-planned return to writing and directing KILL BILL VOLUME I the bad-boy hero to schlock-loving video-store clerks everywhere came roaring back and proved that he had not gone soft during the quasi-hiatus."Kill Bill" was originally supposed to be one complete feature but rather than compromise on what was looking like an epic running time, Tarantino and his producers Bob and Harvey Weinstein decided to release it in two installments. This was to the good, I think. I compare the duo of features to an LP record album, Vol. 1 being side A, with all the hits and hooks, Vol 2 the B-side, a more mellow, thoughtful reflection.

The flick is a basic revenge yarn writ large (if non-linear), with an all-star cast bumping shoulders and other body parts against sleaze-movie character-players of yesteryear, pulled out of semi-retirement by ultimate fan Tarantino, and quirky satirical touches on down the line (from the '70s-grindhouse opening pre-title to a closing memorializing Charles Bronson), to remind viewers that it's all a fizzy cocktail of myriad drive-in actioners, japanimation, Star Trek references and flea-pit martial-arts imports that a young Tarantino and pal Roger Avery devoured by the SLP-ful back in the days when Q worked at West Coast video
shops.

Divided into non-chronological chapters (at least some of which are named after beloved trash pictures of yesteryear), KILL BILL VOLUME 1 depicts the bloody aftermath of an ambush by the dreaded Deadly Viper Assassination Team on an El Paso wedding chapel, leaving only one known survivor, the heavily-pregnant bride (Uma Thurman). Once a member of the killer crew herself, going by the name Black Mamba, she was, evidently also once the lover of the quintet's enigmatic leader, the barely-glimpsed Bill
(David Carradine, getting a full showcase in Volume 2) - who waxes apologetically before putting a bullet in her brain.

Four years later Black Mamba AKA The Bride wakes up in a hospital coma ward, having lost her baby and gained a metal plate in her head. But she remembers everything of her ordeal (Quincy Jones' "Ironside" theme as an soundtrack cue), and - slaughtering a couple rednecks before even attaining full mobility - she embarks
on a mission to kill those responsible for the El Paso massacre - her four other team members and Bill himself.

Much KB1 takes place in the Far East, where Tarantino bathes in the samurai-sword fetish that surfaced in the pawnshop of PULP FICTION. The Bride has retired Okinawa master Hattori Hanzo (Sonny Chiba), once Bill's mentor, fashion a blade sharp enough to cut God. Then onto Tokyo for settling old scores with the well-guarded O-ren Ichii (Lucy Liu), alias Cottonmouth, a Deadly Viper assassin who has risen to rule the city's yakuza gangs, and whose vicious childhood is retold in one chapter done entirely as Japanese-style animation, a fact that will have the fanboys in orgasm. Hope nobody is put off by decapitations. Tarantino fans generally aren't.

Sure, levity comes through in the absurd notion of a penniless Jane Doe somehow having the wherewithal to jet all over the world (her fearsome saber evidently unchallenged at the security check), comprehend Japanese and French, and whatever did happen to that plate in the Bride's head? This is all movie junk food,
true, but one prepared by a total pro who can make even louche pop-culture geekdom a fine art. Thurman is attired in a yellow jumpsuit like Bruce Lee in his final project GAME OF DEATH; Vivica A. Fox's character is named in honor of blaxploitation heroine Jeannie Bell; a Nippon schoolgirl killer is sort of a tribute to manga
assassin Golgo 13, whom Sonny Chiba portrayed in a series of action flicks; the opening theme was written by Sonny Bono, performed by Nancy Sinatra. etc. etc.

Yes, KILL BILL VOLUME 1 wound up taking home fewer awards than another movie that came out the same year, MYSTIC RIVER...but guess which one is more likely to get a foot-stomping revival on a big-screen amidst zonked-out Case-Western students trying to forget their career-less futures and unpayable student loans for a night? Not the Eastwood drama, I’m afraid.Some will say that KILL BILL is the best B-flick ever made. No. To steal a note from Tenacious D, it is not the greatest B-flick ever made - but it is the greatest tribute to it. (3 1/2 out of 4 stars)
Posted by Charles Cassady Jr. at 12:01 AM