[THE HEDGEHOG opens in Cleveland on Friday September 30th exclusively at the Cedar Lee Theatre.]
Review by Bob Ignizio 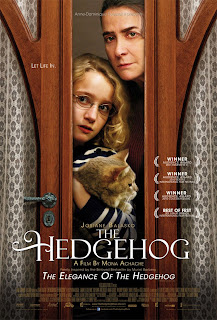 Paloma (Garance Le Guillermic) is a smart, talented eleven year old girl who plans to kill herself the day after she turns 12. She finds this preferable to what she describes as the “life in a fishbowl” existence of her bourgeois parents, an existence she believes she is predestined to follow in. But for now, with 165 days left to go before making what she sees as a romantic escape from existence, Paloma documents her family with a video camera so that those left behind will know why she did what she did. Sure, it seems like pretty extreme measures to take, but such drama is not unusual among adolescents.

Paloma's view of life begins to soften somewhat as she spends time with her apartment building's janitor Renée Michel (Josiane Balasko) and new Japanese neighbor Mr. Ozu (Togo Igawa). Ozu recognizes right away that there is more to the frumpy maintenance woman than meets the eye, and as he reaches out to Renée, the woman's curmudgeonly exterior softens. It is really this relationship that is the heart of the film, and as Paloma watches it unfold she begins to have a sense of hope that maybe people can change the path they're on.
THE HEDGEHOG is both gently funny and profoundly sad in just the right degrees, and director/screenwriter Mona Anchache and her cast manage to give this material a real emotional resonance. Even Paloma's family, written as essentially cardboard characters, are given some degree of life by the supporting cast. That doesn't entirely make up for a script (and an ending) which feels more than a little contrived, but it goes a long way towards it. 3 out of 4 stars.
Posted by Bob Ignizio at 12:01 AM