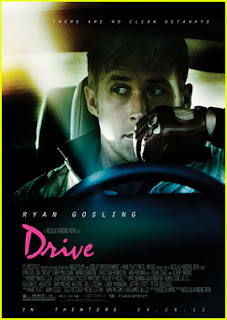 Benecio (Kaden Leos), the little boy who lives next door, explains to Ryan Gosling's Driver that sharks are always bad guys; you can tell because they look like they're bad. The predators who populate the cast of DRIVE do a much better job of keeping their true natures hidden, with Gosling's unassuming stuntman by day, get-away driver by night, very possibly the most dangerous of them all.
DRIVE begins with an exciting pre-credits sequence in which Driver shows just how good he is at his night job in a chase scene very different than any I've ever seen. It then settles down for most of its first hour to build character and mood. As DRIVE reaches its final act, it erupts into an orgy of cringe-inducing violence. Such shifts can often be jarring, but everything about how director Nicholas Winding Refn has constructed this film is deliberate and perfectly executed, from the cinematography and casting to the songs on the soundtrack and even the neon pink font used in the credits.

No time is wasted on a backstory for Gosling's character, but it's easy to infer that this is a man who has seen and done some nasty things that he'd like to put behind him. He comes closest to finding inner peace when he begins spending time with Benecio and the boy's mother Irene (Carey Mulligan). Driver becomes something of a father figure to the boy as a romance with Irene slowly, quietly begins to grow. That all comes to an end when Irene's husband Standard (Oscar Isaac) gets released from prison, but not exactly in the way you'd expect.
Gosling's Driver possesses all the cool of a classic Steve McQueen or Clint Eastwood character, a true honorable anti-hero. He's still involved in criminal activity, but he has very clear stipulations about what he will and won't do on a job, including a refusal to use guns. Not that he doesn't know how to use one, as we eventually learn. Gosling says very little but conveys all that is necessary with his terse performance.
Mulligan is excellent as well, bringing real depth to what could easily have been a throwaway “girlfriend of the main character” role. As for the bad guys, Ron Pearlman can always be counted on to provide more than just menace. The real surprise is comedic actor Albert Brooks, who proves himself quite capable of swimming with the rest of the sharks in the film. Bryan Cranston (star of Breaking Bad) as Driver's luckless friend Shannon and Christina Hendricks (Mad Men) as Blanche, a petty criminal who nonetheless has an important part to play, do top notch work, as well.
Even though this is the first time Refn has directed a script he didn't write himself (the script is by Hossein Amini from James Sallis' novel), it's a perfect marriage of source material, adapter, and director. The film's core theme about people not being able to escape from their true natures is one that Refn has tackled before in BRONSON, a film about a violent convict who not only can't stay out of jail, but doesn't want to. As I mentioned earlier, there is some pretty brutal violence towards the end of DRIVE. It's nowhere near as extreme as what was in BRONSON or VALHALLA RISING, Refn's previous two films, but it may well be too much for some viewers. Refn's more experimental tendencies have been toned down as well. It might sound like a compromise, but it all adds up to Refn's best and most accessible film to date.  4 out of 4 stars.
Posted by Bob Ignizio at 12:01 AM