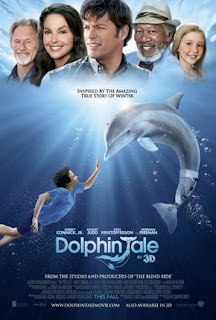 Paddle-boarding the sugary wake of feel-good ocean drama SOUL SURFER comes DOLPHIN TALE, another outrageously sweet, based-on-actual-events story of recovery and redemption whose titular character loses an appendage in an oceangoing accident.  Only this time the leading lady is not a champion boarder, but a bottlenose dolphin named Winter.
Sawyer Nelson (Nathan Gamble) is an introverted preteen in who hasn’t really come out of his shell since his father walked out on him and (incredibly) his mother (Ashley Judd).  The lethargy only deepens after his role model soldier-cousin (Austin Stowell) ships overseas.  The boy’s grades were already bad; now he’s trudging through English in summer school.

Sawyer finds focus one morning after happening on a beached dolphin at Mosquito Lagoon, where the tail of the three-month old mammal is snared in a crab trap. A team of good Samaritans from Clearwater Marine Aquarium bring the dolphin to their facility for treatment, but a nasty infection necessitates amputation of its fluke.  Although surgery saves Winter’s life, Dr. Clay Haskett (Harry Connick Jr.) believes the dolphin’s improvised swimming pattern will irreparably damage her spine.

The story has no true villains, yet nothing comes easy for our band of wet-suited After-School Specialists.  The aquarium is in dire financial straits and may have to (ahem) liquidate its assets.  Sawyer’s teacher won’t award course credit if he keeps missing class to nurse his dolphin, who rejects her prototype prosthetic.  Oh, and there’s a hurricane bearing down on that might literally blow all their dreams away.  Auntie Em!

Helmed by actor (STARMAN)-turned-director ( ) Charles Martin Smith, DOLPHIN TALE shamelessly plucks heartstrings, milking themes of hope and cooperation in the face of adversity.  There’s even a human parallel offered for Winter’s debilitation.  And of course, there’s a subtle, underlying commentary on mankind’s negative impact on the ecosystem.  Kids will adore the film, but at nearly two hours it’s a tad longer than it needs to be.  Some crucial turning points are too predictable, while other seemingly-telegraphed subplots surprisingly don’t pan out.  We watch Sawyer tinker with a radio-controlled helicopter, see Clay practice saxophone by moonlight, and visit his retiree dad on their houseboat—but all are narrative dead ends that don’t build on character enough to justify inclusion.   Still, it’s difficult to not like the photogenic principal cast.

The opening sequence—featuring playful, curious Winter gallivanting at sea with his pod—looks magnificent in 3D.  There’s also a comedy bit involving the ’s mischievous pelican mascot, Rufus.  But the visual effect isn’t used remarkably well anywhere else, so skip the surcharge on this one.
2 1/2 stars out of 4
Posted by Peter M. Roche at 12:01 AM