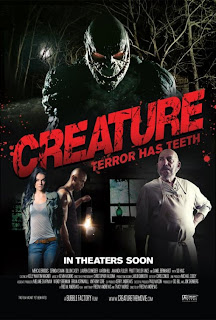 In the interest of full disclosure, you should probably know that before I saw even a single frame of CREATURE projected on a screen, I had already awarded the film a bonus half a star simply because its titular monstrosity was brought to life not by CGI, but by a man in a rubber suit. I think the last time a new rubber suit monster toplined a movie with a national theatrical release was when the original PREDATOR came out back in 1987. The man-gator in CREATURE isn't quite on that level of coolness, but it comes close, and dammit, that counts for something in my book. If it counts for something in your book, too, then keep reading. Everyone else can stop right now, because this is an old fashioned drive-in movie that probably won't resonate with viewers who favor the more realistic Hollywood horrors of the modern age.
The plot is pretty standard stuff. A group of friends are driving through the backwoods of Louisiana. They stop at a convenience store where the shop keeper (Sid Haig) tells them the local legend of half man, half alligator Lockjaw. Of course the group decides to go off into the swamp to find the cabin where the creature supposedly once lived, treating the whole think as a joke. It isn't long, though, before they learn that Lockjaw is no laughing matter.
So on to the important things for a movie like this. Yes, there is considerable nudity from the female members of the cast, with only lead actress Serinda Swan keeping her shirt on. Just as importantly, if not more so, there is a good bit of gore and some well staged kills. And as I mentioned right from the start, we've got ourselves a pretty cool monster here. So the Joe Bob Briggs “3 B's” (blood, breasts, and beasts) are all well represented. Unlike last year's PIRANHA 3D, however, CREATURE doesn't overdo the exploitation elements trying to convince the audience just how fun and edgy it is. We've also got inbred rednecks, abandoned cabins, underground tunnels, weird religious rites. Oh yeah, and the black guy doesn't get killed in the first ten minutes, always a plus when dealing with low budget exploitation movies.
On top of that, there's also a solid cast of respectable up and comers like Swan and star Mehcad Brooks (already familiar to some horror fans for playing “Eggs” on HBO's True Blood) mixed with experienced character actors like Haig (“Captain Spaulding” in THE DEVIL'S REJECTS and star of countless seventies schlockfests) and Pruitt Taylor Vince (trust me, you've seen the guy in a million things). You need capable actors to help sell cheese like this. That's especially true in a movie like this that tries to play it straight (without taking itself too seriously) instead of winking at the audience.
Mind you, this is not a movie that sets out to achieve greatness. It only wants to offer a little lowbrow entertainment, and it does just that. But I respect that co-writer/director Fred Andrews puts some actual passion into his film. You can tell he loves these kind of movies, but he doesn't feel the need to constantly shout his influences in your face like Rob Zombie or Eli Roth. CREATURE may well only work for a very particular kind of viewer – the sort of person who loves seventies and early eighties trash like OCTAMAN, HUMANOIDS FROM THE DEEP, and the original version of PIRANHA – but said viewer will have a blast. 3 out of 4 stars.
Posted by Bob Ignizio at 12:45 AM