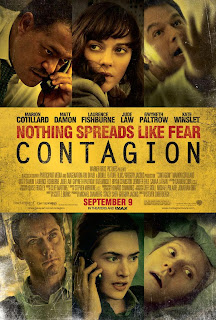 If the human race becomes extinct, it's just as likely to be with a whimper as it is with a bang. Sure, we could still very well blow our planet up with nuclear warheads, and despite what those who lack an understanding of science may believe, global warming is a very serious threat. But just as likely a doomsday scenario, if not moreso, is one in which a simple micro-organism evolves into a fast spreading, highly resistant virus that wipes out most, if not all, of the human population without concern for race, religion, or political party. Maybe we'd get lucky and find a cure before the numbers rise too high, maybe not. Hopefully we'll never have to find out, but Steven Soderburgh's CONTAGION offers one view of how it all might go down.

Helping Soderburgh bring Scott Z. Burns screenplay to life is an all-star cast including Matt Damon, Gwyneth Paltrow, Laurence Fishburne, Jude Law, and Kate Winslett. Having so many big name actors in a disaster film can at times undermine attempts at seriousness, bringing to mind Irwin Allen's hokey seventies films like THE SWARM and THE TOWERING INFERNO. In CONTAGION, Soderburgh turns that notion on its head. One member of his big name cast falls victim to the film's super virus almost immediately, letting us know right from the start that no one is safe. But most importantly, neither the script nor any of the actors ever go over the top. As a result, the film manages to maintain a sense of urgency without sacrificing believability.
Even characters who are immune to the bug are still at risk from their fellow humans. As in George Romero's DEAD films, Soderburgh takes the point of view that basic human nature is every bit as dangerous as any outside threat, and the institutions and rules we rely upon will most likely fail us in any major emergency. However, CONTAGION removes the distancing comfort of fantasy, presenting a far more realistic scenario than flesh eating zombies bringing about our end. The real difference between the two directors, though, is that Soderburgh holds on to some hope that the decency of individuals may come through in time to save us. Where Romero's films gives us characters who at best are survivors, CONTAGION still believes in heroes. 3 1/2 out of 4 stars.
Posted by Bob Ignizio at 4:45 PM