Aurora (September 24th and 25th at the Cleveland Cinematheque) 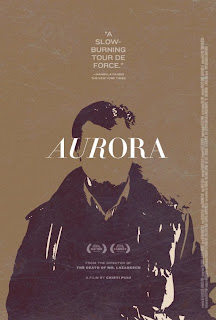 THE DEATH OF MISTER LAZARESCU (Moartea Domnului Lazarescu), writer-director Cristi Puiu’s 2005 Cannes-storming debut about a dying man’s tragically absurd journey through the administrative labyrinth of Bucharest’s byzantine health care system, was ubiquitously (and appropriately) described by critics as “Kafkaesque.” In keeping with the philo-literary existential theme, let me be the first to hail Puiu’s new film, AURORA, as Camus-ish. With it’s muted colors, achingly deliberate pace and Laconic violence, AURORA does for domesticity and modern man’s work-a-day routine what THE DEATH OF MISTER LAZARESCU did for bureaucracy: it demonstrates the way in which the systemic machinery designed to keep society intact often comes at the price of its component parts, namely empathy, efficiency and individual human lives.

The life in question here is that of machine consultant Viorel, who’s played with dead-eyed, lumbering solemnity by Puiu himself. From his job, to his home life as a lonely divorcee, to his hobby (gun collecting) and even his curtainless, anxious showers, Puiu painstakingly reveals the mundane routines of Viorel’s life in a ponderous series of sparsely shot, real-time sequences. Puiu shoots much of the film through door frames , windows and even the windshield of Viorel’s car, which serve to reset the boundaries of the movie screen and reframe the action in chipping, institutional paint, dull plaster, and the edges of furniture. Often, Viorel watches the film’s action from the same perspective as us, gazing curiously into the tumultuous domestic landscape of a friend’s or neighbor’s apartment, or at a crowded rainy street. Other times, we are left outside, as Viorel wanders into these scenes – these rooms - to carry out banal conversations and, eventually, commit acts of horrific, unprovoked violence.

It’s this violence that has caused some viewers to glibly refer to AURORA as a “reverse murder mystery,” citing the fact that we know the culprit, but not the motive. It’s a description that’s not only inaccurate (murder mysteries frequently ensnare the guilty before revealing his or her shocking, real motive), but also a sadly reductive vision of the film. I don’t disagree that Puiu is engaging with the patterns of entertainment media – specifically film – but it’s on a much broader level than the simple self-conscious reconnoitering of the boilerplate pot-boiler.

This larger point is evident in Puiu’s shot blocking: the establishment of these rectangles of action set within the bleak quiet of the larger frame effectively create an appearance of two worlds: Viorel’s lonely existence on the outskirts of what, in truth, is his own life; and the lives of those around him. Just as Viorel watches others through these portals, we watch Viorel on the screen. Viorel starts the movie as a hapless voyeur. He’s lived through divorce and the death of his father, and he’s staring into the overly bright and cacophonous (Puiu relishes in familial shouting and bodies moving chaotically in and out of his artificial frames) lives of others with a curious frustration at the fact that he can’t recognize why the unattractive domestic routine, with all its screaming and crowding, is more tolerable than his new routine of lonely commutes and bachelor pad redecoration. So he stops watching, and acts, and in a despairing attempt to shatter routines and forcefully reenter society – with a literal Bang- Viorel commits several surprisingly brutal acts.

The larger point, of course, isn’t just that as Viorel watches his neighbors, we watch him, and then… buh buh bum maybe some weirdo stands in the theater door and watches us. In the beginning of the film, it’s easy, as a viewer, to scrutinize Viorel’s actions… to play the part of the dutiful filmgoer (a classically voyeuristic role, by the way) and attempt to decode the character and his actions. And Puiu, by spending so much time on Viorel’s shopping trips and showers, dares us to do just that. You almost forget sometimes that the character's world, and the smaller worlds in the windows and doors are one in the same - a fact the Viorel, given his limited perspective, has a much harder time perceiving.

As outside observers, we can see that he’s part of the picture, and, in the end, understand that even in his violent bid to disrupt mundane routine and order, he only reinforces it. We glimpse the routine of a machinist who fashions gun components, we spend the movie with the killer who uses the gun, and we meet the police, who work consistent beats and as part of their own banal, everyday routines, question killers.

Is it a bit trite to suggest that the film wants the viewer to examine his or her own life from a distance? To perceive themselves as something more than just viewers? Is the movie in and of itself perhaps a bid to encourage film audiences to take a more active part in the viewing experience?

To those who answered, "no... dude... except that trite question. Yes to that." How about this: