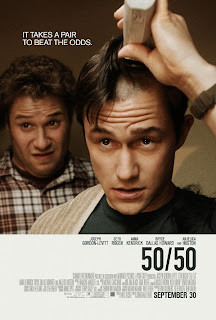 There are laughs to be found in any situation, no matter how grim. I truly believe that. But let's be honest, cancer has to be one of the least productive veins to mine for comedy gold. If you wanted to let someone know just how unfunny they are, you might tell them they're about as funny as cancer. Despite having the comedy odds stacked against it, 50/50 still manages to hit the mark more often than not while never losing sight of the seriousness of its premise.

Adam (Joseph Gordeon-Levitt) is young, exercises, and seems to have everything going for him, including a relationship with attractive artist Rachael (Bryce Dallas Howard) that's beginning to get serious. He's certainly not expecting to find out he has a rare kind of cancer, but he tries to put on a brave face. This dire turn of events causes Rachael to show her true superficial colors, but luckily Adam finds support from his best friend/comic relief sidekick Kyle (Seth Rogen), a couple of other cancer patients (Phillip Baker Hall and Matt Frewer), and pretty young therapist Katie (Anna Kendrick). But even with all that emotional support and a stereotypical overbearing mother (Anjelica Huston), it won't change the fact that Adam's odds of survival are, you guessed it, 50/50.
The script is certainly nothing to write home about, with the plot taking a turn into predictable rom-com territory as Adam and Katie's relationship moves beyond doctor/patient while Rachael shows up looking for a second chance. Gee, wonder which woman is right for our hero? Thanks to Godron-Levitt's believable lead performance and a reasonable quantity of laughs, though, 50/50 manages to be more enjoyable than it should be. Even Rogen, essentially just doing his usual Seth Rogen role, comes across more likeable here than you'd expect.
Look, if you want something daring, edgy and original, this isn't it. Go see DRIVE. It's one of the best movies of the year. It's also not for everyone. If you're more in the mood for an emotional, dare I say even uplifting and inspirational comedy that doesn't lay the saccharine on too heavy, then this is probably more your cup of tea. Sure, there are a few loose plot threads left dangling, notably the fate of Phillip Baker Hall's character, and it would have been nice if some of the supporting characters had been a little less one dimensional, but overall 50/50 delivers what it promises. 3 out of 4 stars.
Posted by Bob Ignizio at 12:01 AM