[THE WHISTLEBLOWER opens in Cleveland on Friday August 26th exclusively at the Cedar Lee Theatre.]
Review by Bob Ignizio 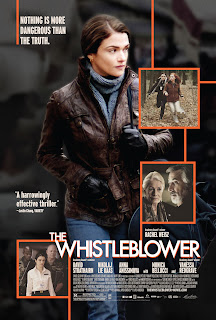 “Inspired by actual events” seems an apt way to introduce THE WHISTLEBLOWER. The film ostensibly tells the story of Kathryn Bolkovac (played here by Rachael Weisz), a police officer and divorced mom who signed up to be a UN Peacekeeper in Bosnia. While there, she began investigating human trafficking and prostitution, and soon discovered that a number of UN workers were deeply involved. The basic facts of Ms. Bolkovac's case are here, but they've been juiced up and reconfigured to fit into a standard Hollywood thriller structure. The result is something along the lines of SERPICO, with Bolkovac as a decent cop adrift in a sea of corruption and misogyny.

As far as I can tell from reading the articles available online about the real Kathryn Bolkovac, a murder was not part of her investigation. In the movie the death of one prostitute becomes a major plot point. The real crimes were horrific enough that it seems kind of crass to add homicide to the mix just for thematic resonance, but that appears to be the case here. Still, most of what's here is close enough to the truth that it should outrage viewers, especially the final outcome of Ms. Bolkovac's investigation.
Considering how unpleasant and sordid the crimes being dealt with here are, I hesitate to use the term “entertaining”. Nonetheless, THE WHISTLEBLOWER is a reasonably gripping, if by the numbers, potboiler. This is the kind of movie that seems almost tailor made to get Oscar nominations, and I'd say Weisz in particular has a decent chance. Good supporting cast as well, including such stalwarts as Vanessa Redgrave, Monica Belluci, and David Strathairn. But it's Danish actor Nikolaj Lie Kaas as Kathryn's fellow police officer and love interest Jan who stands out the most. As for the direction, it's competent but uninspired, so don't expect any nominations for Larysa Kondracki. THE WHISTLEBLOWER falls well short of greatness, but it is a solid, well made film. Combined with the importance of its subject, that makes it worth seeing. 3 out of 4 stars.
Posted by Bob Ignizio at 12:01 AM