A Useful Life (August 8th and 12th at the Cleveland Cinematheque) 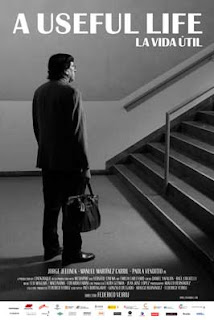 Sometimes people experience a difficult time relating to others in real life, but fulfill that need for deep human connection in a more distilled cinematic form.  This is particularly true for the troubled curator of an arthouse movie theater in this film by Uruguayan director Federico Veiroj.  Played by actual film critic, Jorge Jellinek, A USEFUL LIFE (La Vida Util)  manages to go all kinds of meta without sacrificing the moment, effectively embracing the artifice of cinema even as Jorge develops the courage to live in the real world.
In one poignant yet playful scene, Jorge decides on a whim to masquerade as a substitute teacher a law school and delivers Mark Twain’s screed on the various merits of lying unselfishly. Bare honesty and naked facts can be unnecessarily painful and even crippling.  Jorge had worked 25 years in the Cinemateca, which had become insolvent and was closing its doors, effectively uprooting his mode of existence and forcing him to become an actor in his life, free from the paralysis of Truth and constant reflection.
While not fast-paced by any stretch of the imagination, A USEFUL LIFE clocks in at an easily digestible 67 minutes, and provides plenty of fodder for thoughtful rumination.  The film has a sort of classic veneer draped over top striking modernist frames, appearing in high-contrast black-and-white although actually shot in color (perhaps another aspect of indulgent fabrication).  The camera often lingers in rooms for a few seconds even after the characters exit, giving not just a sense of the constructed environments they inhabit, but also alluding to the essential bareness of existence without human embellishment.  In addition, as Jorge falls deeper into raw experience, the film attains an increasingly bombastic score, with the orchestral contrivance paradoxically bringing more life to the screen.  By the end, Jorge is not quite transformed as much as he has become uninhibited: not changing who he is exactly, but rather who he lets himself be.  The lies of the cinema are projected far beyond the screen.  3 out of 4 stars.
Posted by Bob Ignizio at 1:27 PM